A few days ago everyone went gaga over videos of Shah Rukh Khan taking his youngest son AbRam on a long drive on the streets of Mumbai. As soon as the bystanders saw the father-son duo on the streets riding a BMW 650i convertible with the roof down, everyone flashed cameras and made videos of them. The look on AbRam’s face confirmed that he was having the best time of his life. But was it really safe for SRK to take the little one on such a ride? Maybe not.

In case you have seen the video, you would know AbRam was in the front seat of the car. Given his age, the kid shouldn’t have been sitting there for the next nine years. To make matters worse, AbRam was being held by a passenger so that he could enjoy the wind flowing, which was a violation of safety rules.

The place where AbRam was in the car, between the front seats, increased the risk. In most countries, children aren’t allowed to take the front seats since the seat belts aren’t structured for such small body frames. Now in India, we don’t have any set rules about occupant safety but it doesn’t mean that those rules shouldn’t be kept in mind. 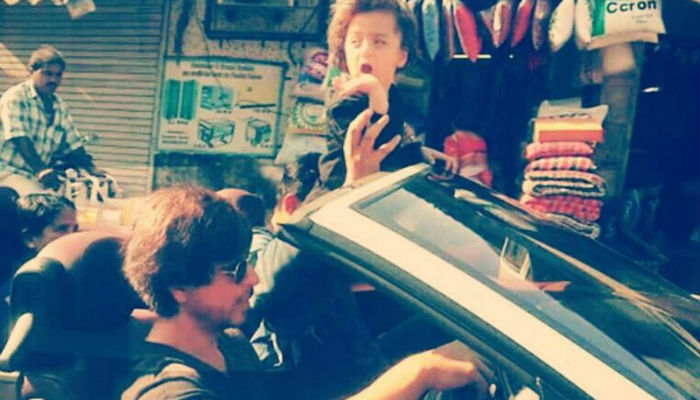 Also read: Watch: Daddy Shah Rukh Khan takes AbRam for a long drive. What happens next will intrigue you more

It is hard to believe that a star of Shah Rukh Khan’s stature wouldn’t be aware of these safety norms. Given how frequent mishaps happen on the roads of India, wouldn’t it have been better if he adhered to the rules? Maybe, yes.

Going by the statistics, about 1,46,133 people lost their lives to road accidents in 2015 in India. This means roughly 400 people die on any given day. Most of these accidents were caused by driver’s fault or overspeeding.

On Independence Day 2016, there was an incident when two kids died due to kite strings. The kids were standing on two different vehicles and clearly didn’t see the strings. The strings, which are sharpened with powdered glass, slit their throats. Apart from this, there are numerous incidents when carelessness cost someone’s life on the road.

Ironically, car company Hyundai which is endorsed by Shah Rukh Khan started a campaign about road safety. Well, don’t you think Shah Rukh Khan should have been a little responsible? Definitely yes.