Sonakshi Sinha and Sidharth Malhotra have started shooting for their upcoming suspense thriller film Ittefaq. The movie which is a remake of the late director Yash Chopra’s directorial has already created a buzz in the industry for its fresh star cast. So when Shah Rukh Khan joined Sonakshi and Sidharth on the very first day of the shooting – it took all of us by surprise!

People started wondering whether we are going to see the king of romance SRK doing a cameo in the film? But it seems, so far nothing has been official. Apparently, Shah Rukh was there on the sets to give his valuable creative advice on the film. For those who do not know, SRK’s Red Chillies Entertainment is co-producing the film with Karan Johar’s Dharma Productions. 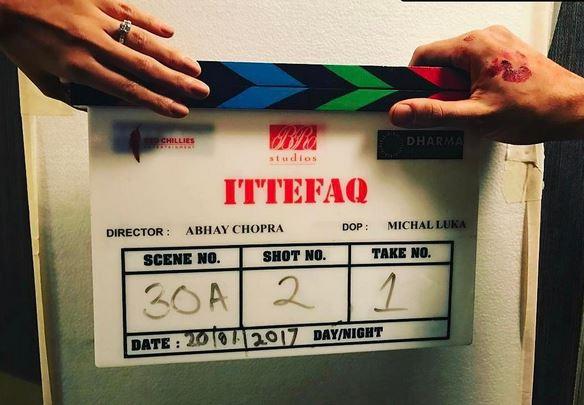 While it is a remake, we feel that this time, the characters are going to be way darker than the original one. Both Sid and Sona have prepared anxiously for their roles.

Going by the picture, Sidharth looked all bruised up. So what we can definitely expect from the movie is a lot of action sequences from the first scene itself! Both characters will portray strong independent roles.

Also read: Sonakshi Sinha and rapper Badshah to do jugalbandi for Noor?

We hope that the remake is one-step ahead of the original one!