Shah Rukh Khan is a man of many talents. Though all his ardent admirers know almost everything about the star, there is one talent of King Khan which not many know of. The hidden quality is that Shah Rukh Khan doodles in his free time. But why has Shah Rukh Khan’s leisure activity garnered so much importance all of a sudden? The answer lies in the amount that one of Shah Rukh’s sketches is said to be fetching.

If median reports are anything to go by, a doodle which Shah Rukh Khan made 20 years ago will be sold for around Rs 2 lakhs. Apparently, when Shah Rukh visited Paris in 1997, he drew this doodle. It was his idea of French capital that SRK expressed on paper. The doodle consists of Bastille, the Concorde, Voltaire, the French Revolution, the French connection, King Kong climbing the Eiffel Tower, a pair of lips depicting the French kiss. He also gave the doodle a Bollywood tinge by adding the famous track ‘Tu Mera Hero No 1’ and wrote, ‘Bhagwan ke liye mujhe chhod do’ on the paper. Signing off, Shah Rukh Khan wrote, ‘In Paris, do as the Indians do.’

The doodle by SRK  is a part of film journalist-critics collection and will be reportedly sold for somewhere between Rs 1.2 lakhs- 2 lakhs.

“The rare sketch is more like a doodle-cum-drawing of Shah Rukh’s visit to Paris. It provides a unique insight into the mind of a cinematic superstar in the making. Though estimated conservatively between Rs 1.2 lakh to R1.80 lakh, it is expected to sell for more,” a source in the know told a leading daily.

Also read: Shah Rukh Khan talks about averting Box Office clash with Akshay Kumar, shuts all who said he was scared of it

Here is the doodle that SRK made: 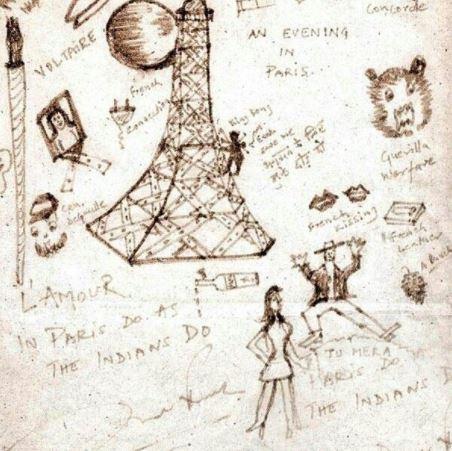 Shah Rukh Khan is currently awaiting the release of his next Jab Harry Met Sejal, helmed by Imtiaz Ali. He is also filming for Aanand L Rai’s untitled movie as well.