The nepotism debate is far from over. Many star kids still deny their privilege with a ‘but… even we have it tough’ line of argument. So it was only understandable that many had their claws drawn out before the release of the Kedarnath trailer. This would be our first peek into Sara Ali Khan’s acting chops. Saif Ali Khan and Amrita Singh’s daughter, Sara embodied the ‘brat’ who cut through the long queues of struggling actors and made her way into an Abhishek Kapoor film and a Rohit Shetty film (produced by Karan Johar). The trailer was hardly long enough to judge her (in)ability, and that’s when the wait for her Koffee With Karan episode began.

Appearing with her well-known father, Sara Ali Khan exhibited a disarming self-awareness. Suddenly, the girl didn’t seem to be in an ivory tower, like she did in those paparazzi pictures. She was just a 25-year-old being a 25-year-old. She had her mother’s exuberant smile and her father’s endearing self-doubt.

To put it in millennial terms – she was #RelatableAF. This might just be a brilliant PR strategy, but to see someone like Sara Ali Khan step out of her ‘paradise’ and make an effort to appear ‘normal’, is a solid first step towards stardom.

Sara has echoed a similar ‘balanced personality’ in her two interviews post her ‘Koffee debut’, where she giggles with abandon and doesn’t shy away from some good ol’ self-deprecation (something associated with father, Saif Ali Khan). At one point when CNN News18’s Rajeev Masand playfully accuses her for ‘wasting’ a seat in Columbia University by ultimately landing a career in Hindi films, Sara can be seen hiding her mild annoyance and responding with – “but it’s contributed to the person that I am today, how can that be called a waste?” The response forces Masand to immediately reframe his next question, that revolves around how a degree in History & Political Science, shaped the actor set to appear in Abhishek Kapoor’s Kedarnath in less than a week. 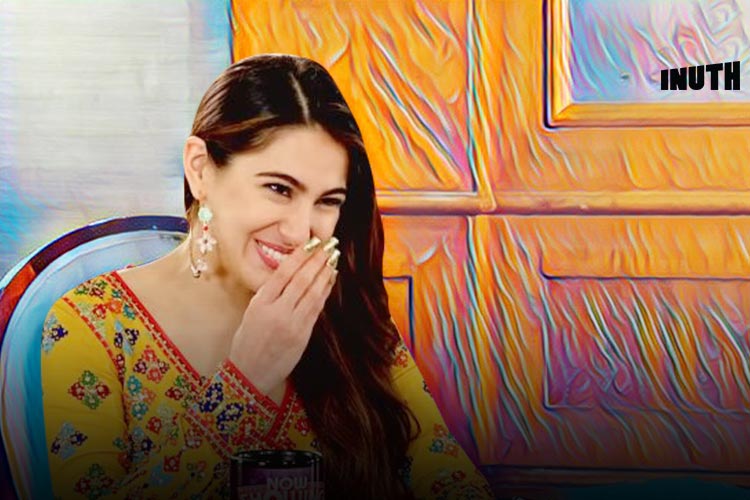 In both her interviews with senior journalists, Rajeev Masand & Anupama Chopra, there is a well-rehearsed politeness about the newbie. She makes it a point to add the prefix of Sir/Ma’am before starting any answer, and even indulges Masand with an adorable aadab. In a year, where we mercilessly attacked poor Suhana Khan for landing herself a Vogue cover, Sara seems to be prescribed antithesis.  She is forthcoming about acknowledging her parents’ fame. She repeatedly mentions ‘not knowing enough’ about a subject, while offering her two-cents about it. Whenever she states an opinion, it begins with caveats like ‘according to me…’ or ‘I really don’t know too much, but…’. Humility like that is instantly likable, even if it is practiced.

As something we’ve seen with Jennifer Lawrence in Hollywood, there is an emphasis on today’s generation of actors with ‘being themselves’. Like her senior-contemporary and Simmba co-star Ranveer Singh, Sara seems intent on playing the balancing act of giving a peek into her ‘real’ self and playing the ‘star’, whose movie releases on the coming Friday. Her ‘good vibes’ is accentuated by ‘adorable’ anecdotes – like her recounting that time when all ‘acting’ meant to her, was dancing to ‘Kaanta laga‘. Or how she mispronounced ‘bangle ke peeche‘ as ‘bange ke peeche‘.

Ahead of a month, that sees Sara Ali Khan appear in two big-ticket Bollywood films – she’s making all the right noises for an ‘upcoming star’. Among contemporaries like Janhvi Kapoor, Ishaan Khatter and Ananya Pandey – Sara Ali Khan is leading the pack by making good use of the generous spotlight afforded to her. Can she harness these worldly experiences, to cement her place as an actor? We’ll know before 2019.