Umm… so if an actor does not do enough action on screen, he’s not a macho actor. Not us, actor Sanjay Dutt thinks so, according to a leading daily’s report.

In a report which has taken one of the leading spots on Google today, a conversation between Sanjay Dutt and Ranbir Kapoor has been highlighted. The report, published in Deccan Chronicle, says that the two actors met at a party recently and talked about Dutt’s biopic in which Ranbir has been roped in to play his character. As the conversation started, Dutt suggested that ‘Laddoo’ should be the name of his biopic. When Ranbir queried, the actor jokingly told him that if he can do a film with the title Barfi, he can have Laddoo, Peda, Jalebi or Imarti as the title of the biopic. He then went on to reveal how he watched Barfi on TV a few days back and didn’t like the film at all. The report quotes the actor telling Ranbir:

I watched Barfi! on TV recently. What made you do a film like that? @#$^&* bloody hell, you are playing me in the Sanjay Dutt biopic. I don’t know how they cast you.

An actor not liking another actor’s role in one of his films is alright. An actor not approving of an actor who is supposed to play his real-self on screen is alright. But what Dutt said after this is completely objectionable. He went on to explain Ranbir that how doing films like Barfi makes him less of a macho actor. He said:

You should be a macho man. Act in macho films. You can’t be doing films like Barfi!. You should be holding guns and doing action films. Do you think actors like me, Salman and Ajay would have been around for so many years, if we had not played macho characters on screen? You have no connect with the masses and that is very important.

Who is an actor?

An actor is a performer. Somebody who lives a different character on stage or on screen. Somebody who tries to infuse life into an imaginary or a real life personality for his audience.

How Ranbir Kapoor qualifies to be an actor?

Ranbir Kapoor is an actor not because he belongs to one of the reputed star families in the industry. But because his choices of films and performances have established him as the one. To his credit, Ranbir could have easily taken up scripts and gotten away by doing enough singing-dancing and meaningless action in a film and still managed to become a star. But he decided to walk on a less-beaten path and chose scripts like Rockstar, Tamasha, Barfi and Bombay Velvet which challenged the actor in him. Most of the films that the actor has done so far do not fall under the category of the films which any quintessential rising star in Bollywood would do.

In his recently released film, Ae Dil Hai Mushkil, Ranbir broke more stereotypes. He danced with those Henna-clad hands and cried like a sobbing baby. For Sanjay Dutt, doing all these things on screen is not ‘macho’. Because macho men do not cry. Macho men do not have emotions. Macho men are not supposed to reveal the softer side of themselves. Why? Aren’t macho men humans?

How did Shah Rukh Khan or Aamir Khan manage to survive so many years without ‘holding guns’ on screen?

According to the quote mentioned in the report, Dutt took his own example along with Salman and Ajay’s name to tell Ranbir how they all managed to survive in the industry for so long. He said that they all still enjoy popularity because they have been doing action films. Why don’t the names of top actors like Shah Rukh Khan and Aamir Khan constitute the same list? Most of the SRK films that we call cults are romantic — DDLJ, Mohabbatein, Veer-Zara, Kal Ho Na Ho and Devdas among others. These are the films in which he cried, showed the longing for his beloved ones and even died to show the emotions verbatim. Most of the Aamir Khan films that we instantly remember also didn’t feature him in an action-driven character. Taare Zameen Par, Lagaan, 3 Idiots, PK — they all remain thought-provoking films in some sense. Not action-oriented ones.

Also read: Tum Bin II is an alarm for Bollywood to raise its standards of showcasing love and romance in films

The other rising stars in the industry, who are being looked upon as the gen-next actors like Shahid Kapoor, Ranveer Singh, Varun Dhawan, Arjun Kapoor, Sidharth Malhotra are also not completely inclined towards just doing action films. Are they not qualified to become stars? They  may be, but they are definitely not the perfect actors in the eyes of Mr Dutt then.

Ironically, when you type Sanjay Dutt on Google, this what it shows in the auto search: 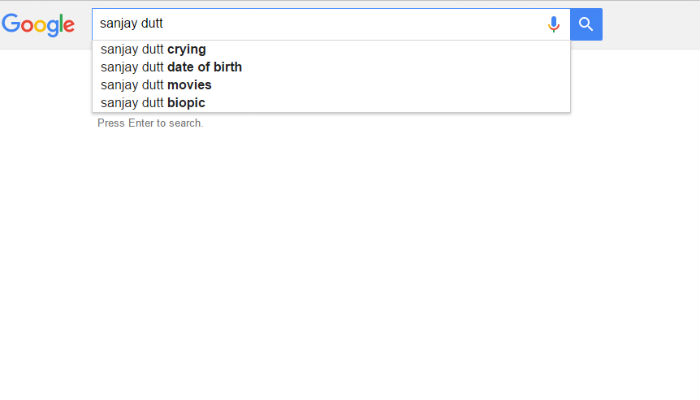 We’re not sure whether or not Sanjay Dutt really said what he has been quoted of. But if he has, he does need to reconsider his benchmarks. With all due respect to the ‘Dabangg’ work that the ‘Khalnayaks’ of our industry do, undermining the power of characters likes Barfi (Barfi), Sid (Wake Up Sid!), Jordan (Rockstar), Akash (Anjana Anjani), Ved (Tamasha), Kabir (Yeh Jawani Hai Deewani) and Ayan (Ae Dil Hai Mushkil) is far away from being justified.

And this has now added to our anticipation to watch Ranbir Kapoor playing Sanjay Dutt on screen soon. Hit it, Ranbir! 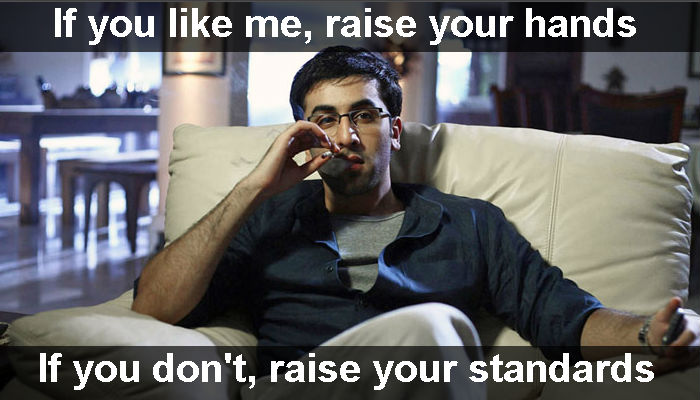