Salman Khan’s LoveRatri, which  stars his brother-in-law Ayush Sharma, has been renamed. Yes, it seems like a lot of time and many minds in the Khan household were spent to arrive at the new title – LoveYatri.

For the uninitiated, the makers of the film were facing protests from fringe groups, who were offended by the earlier title’s spin on the word Navratri, a Hindu festival. So the top management of Salman Khan Films – (presumably) Salman, Arbaaz & Sohail have together come up with the idea to fix one letter – and now the world is not the same anymore. 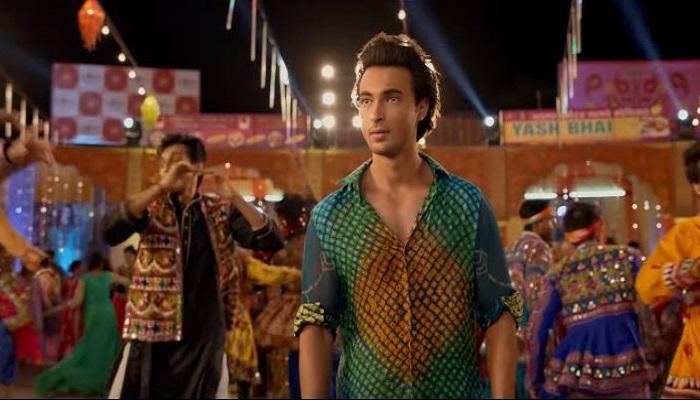 LoveYatri, unlike LoveRatri, is a whole new film that doesn’t have any of the problems of the trailer with the earlier title. Just by substituting one letter, Salman Khan & Co. have managed to fix everything that didn’t ‘fit’.

Here are 8 GIFs to illustrate this:

1. Entry of the ‘ambitionless, college-going’ hero, who is considered a ‘headache’ by entire mohallawallahs is like a beautiful brainwave, that hasn’t been a thing since the many Bollywood films from the 1990s.

2. This heroic, overenthusiastic reaction to being struck by a dandiya (with a smile, of course) – is no longer considered overacting. Oscar lao re!

3. Hero leches at foreign-returned girl during dandiya raas, and it rains. There is a deeper meaning to it, the rain is metaphor for… never mind.

4. Not that it’s being done since Saira Banu’s days in Purab Aur Paschim, but a foreign-returned heroine shalt prove her Indian-ness by enunciating Hindi/Gujarati words, slower than Fardeen Khan in Prem Aggan.

Does nobody remembers Rani Mukherjee’s disturbing switch from her own husky voice to Alka Yagnik’s, as she sang Om Jai Jagadish Hare to shutdown fuckboi/bully Rahul? Warina Hussain is breaking new ground here.

5. Bhai is sanskaari, okay? He only does near-kisses, in case there aren’t flowers nearby. And this recreation of a Bollywood near-kiss seems to be subtext for this Tinder generation’s commitment-phobia. Only Salman can.

6. The new title also makes Bollywood ‘elders’ like Ram Kapoor, who gives a rather strange pep-talk about chasing one’s love interest for ‘9 Days/9 Nights’, less problematic. He’s only repeating something Shiv Khera wrote about – beta, you can win!

7. The girl’s father can be the antagonist in a love story okay? So what if it’s been done 989747383 times? Ronit Roy’s crisp suits and his IDGAF-face (from Udaan) lends a whole new meaning to the trope that peaked with Amrish Puri in 1995.

8. Oh yes, the new title totally fixes the ‘cameos’ by Arbaaz & Sohail – something they’ve quietly been slipping into their Wikipedia pages and IMDB Pro ‘filmography’. So that something shows from the recent years. Just kidding.

Listen, if you guys are still not understanding how LoveYatri is going to be, you probably don’t deserve stars like Salman Khan. You have to look beneath the surface – the biceps, the shoulders, the inconsistent anglicised accent, the many launches. Nepotism kaun?