Salman Khan essays the role of a small town man Laxman Singh Bisht in his upcoming film Tubelight. Directed by Kabir Khan, the film set in the backdrop of the 1962 Sino-India war has Sohail Khan, Chinese actress Zhu Zhu, late Om Puri and Mohammad Zeeshan Ayyub in pivotal roles. Ever since the trailer was unveiled on May 25, Salman’s fans have gone gaga over their superstar’s latest look, already declaring it to be a blockbuster before its theatrical release.

Salman Khan boasts of a huge fan following across the globe. Every year, the release of his films are no less than a festive affair and enjoys a demi-god status among his admirers. But the 51-year-old actor has a different opinion about who is the biggest superstar. “I don’t think star-wise and actor-wise there is anybody bigger and better than Dilip Kumar,” Salman told InUth. Adding further, the Dabangg actor spoke highly about none other than Amitabh Bachchan. 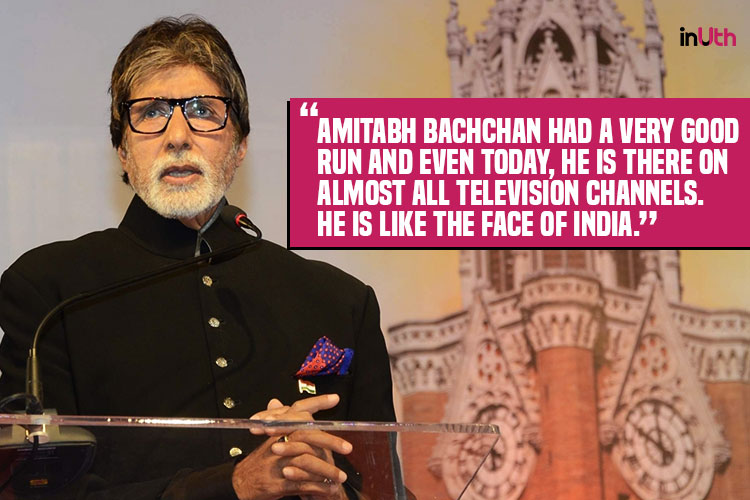 Salman Khan and Amitabh Bachchan have worked together in Baghban, Baabul and God Tussi Great Ho.

Salman Khan’s statement about the 75-year-old actor is interesting as there were rumours about both the actors not on talking terms. Salman had a torrid relationship with former Miss World Aishwarya Rai who later tied the knot with Abhishek Bachchan. Both Salman and Big B have worked together in films like Baghban, Baabul and God Tussi Great Ho.

During the conversation, Salman also had nice words to say about late Rajesh Khanna.”Star-wise, if you think we guys (Khan’s) have the popularity, then there was this phase for 6 to 8 years by Mr Rajesh Khanna and I think nobody can ever be as big a star as him.”

Also read: The Salman Khan interview: ‘When I was growing up I had shades of the character I play in Tubelight’

Interestingly, Salman also termed actor Kumar Gaurav among the superstar.  Son of yesteryear star late Rajendra Kumar made a successful debut with Love Story. Unfortunately, he could not achieve much success in his film career.

“Following Rajesh Khanna is Kumar Gaurav. When I was 16-17, I saw Kumar Gaurav’s stardom and it was unbelievable. When somebody tells me that you are the biggest superstar, I feel we are not even 10% as compared to them,” Salman said.