You’d be hard-pressed to find kids in India who’ve escaped the grubby hands of random visiting adults who pinch a child’s cheeks by way of greeting. Or give them impromptu (and often unwanted) hugs. To a very large portion of our population, the very idea of asking a kid if he/she wants to be touched, is probably preposterous.

As a plump pre-teen with faulty reflexes, having my cheeks pulled till they felt raw, was an everyday event. When you’re yet to figure out how to say ‘no’, there’s no option but to let people give you suffocatingly long hugs, and hope your disinterest registers at some point to make them back off. But they never do. Instead, what follows is a small dissertation on how aaaw-dorable and cute they find you. At times with more cheek-pinching.

All of those latent memories came rushing back thanks to this clip shared by actress Jacqueline Fernandez on Instagram. The short video is from the sets of dance reality show, Dance Deewane, where the cast of Race 3 was promoting their upcoming film. In it we see Salman Khan talking (bullying?) a child in a mock-angry voice after he refuses to hug Fernandez. She wants to, he doesn’t and explicitly says so. 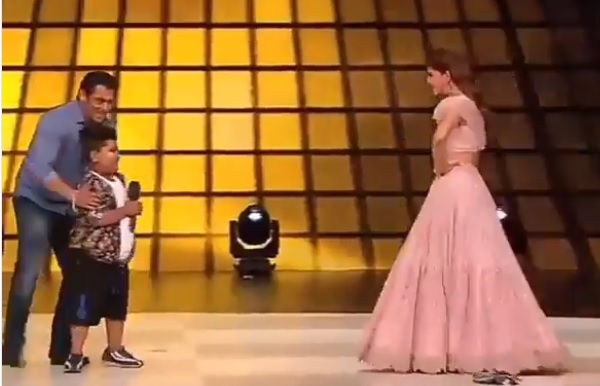 So obviously Bhai takes the actress onstage to ‘make the child’ hug her. Twice. The first time round he just stands, with his face moving backwards as she hugs him, an awkward smile plastered across his face. The second time Salman asks (nay, orders) him to hug Fernandez ‘tightly’, he bumps sideways into her.

Kid of 5 or 6 says he doesn’t want to hug Jacqueline Fernandez. Celeb panel laughs. “Aise kaise?” Repeatedly he says he doesn’t feel like hugging her. Body language suggests same. Salman Khan forces him to hug her. Forces him to “tightly hug her” once again. Consent be damned. https://t.co/UPd9RfI0mD

Anyone remotely aware of how kids behave would have seen this as a sign that he absolutely wants to be left alone. The adults in the room however laugh in response to his discomfort, while Fernandez gives him a belly rub.

Kids usually love me, this boy was an exception.. at least I got my hug in the end __ #dancedeewane @beingsalmankhan @madhuridixitnene @anilskapoor

Is it just me or does Salman Khan’s belligerence remind anyone else of those annoying distant relatives who egg kids on to ‘sing for uncle’, ‘hug aunty thoda sa‘, ‘sit on bhaiya‘s lap, beta‘ at family functions?

One would think that the child’s uneasiness and downright refusal would be enough of a hint to leave him the heck alone. Instead, Fernandez took to Instagram to talk about the kid with a caption so obtuse, reading it may cause you physical discomfort. “Kids usually love me, this boy was an exception.. at least I got my hug in the end,” she writes undoubtedly thinking that overriding a child’s refusal makes for a ‘charming’ anecdote. And going by the comments on her post, her opinion is clearly shared by many.

The fact of the matter is that Salman Khan isn’t the only one who doesn’t get that children should be left alone, if they do not want to be touched. Your door ke chacha, your neighbour’s sister, your best friend, and perhaps you too don’t get it.

But then, in a country still grappling with consent, the idea that kids too have the right to decide who can or cannot touch them, is a concept still unheard of.