Salman Khan’s latest Eid release, Tubelight might have failed to live up to the expectations of his last releases, but it is Salman’s 11th highest grossing movie of all time. The film has crossed Rs 100 crore mark on day six of its release. And with this, Salman Khan becomes the only Indian actor who has 11 back to back Rs 100 crore films at the Box Office in India. The Sultan actor, who started the trend of releasing his film on the occasion of Eid, never disappointed his fans. The trend started from 2010 with Arbaaz Khan directorial, Dabangg which went onto collect Rs 138. 88 crore at the domestic Box Office in its lifetime business.

The trend then became an unstoppable wave with even his 2016 released Sultan taking the Box Office by storm with a collection of Rs 300 crore. Directed by Ali Abbas Zafar, the film featured the actor in the role of a wrestler. It also featured Anushka Sharma playing a wrestler.

In fact, Tubelight too, even with the negative reviews and comments, has garnered Rs 110. 07 crore. Set in the backdrop of the Indo-China war of 1962, the film shows an emotional journey of two brothers Laxman Singh Bisht (Salman Khan) and Bharat Singh Bisht (Sohail Khan). Directed by Kabir Khan, the film marks the third Bollywood outing of Kabir and Salman after their last two release Ek Tha Tiger and Bajrangi Bhaijaan. Also, mark the Bollywood debut of  Chiese actress-singer Zhu Zhu and Matin Rey Tangu, Tubelight released on June 23, 2017.

So, as Sohail Khan and Salman Khan starer Tubelight crossed the Rs 100 Crore mark, here we bring to you a list of his other ten highest grossers of all time. Let’s take a look here: 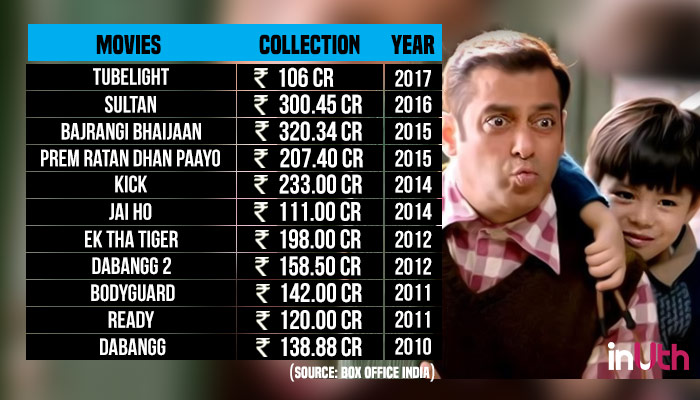