Shah Rukh Khan is gearing up for Jab Harry Met Sejal release on August 4. It is the second release for the 51-year-old actor this year, after Raees, released in January, turned out to be an average grosser. Meanwhile, his BFF Salman Khan is busy shooting for Tiger Zinda Hai which is scheduled to release on December 22. Comparisons are inevitable between the A-listers and their releases, but who do you think is more popular on Facebook right now?

According to Facebook data analysis website Social Bakers, at present, Salman boasts of a total of 35.32 million fans as compared to Shah Rukh’s support base of 23.60 million followers. In June, he had performed well on Facebook in terms of popularity quotient despite his latest release Tubelight’s disappointing performance at the Box Office.

But it turns out having a huge fan base is not the sole criteria for your popularity on Facebook. It is important that the celebrities continue to amass more supporters with a strong presence. Despite the Dabangg actor having more fans than his Karan Arjun co-star, Salman Khan’s domination has been increasingly challenged by Shah Rukh Khan both in terms of audience growth and interactions.

Also read: Who is a bigger star on Facebook, Salman Khan or Shah Rukh Khan? Here are the results

The tables turned in July with Shah Rukh outsmarting him in all the major aspects. Between June 29 and August 3, SRK witnessed an impressive performance on Facebook in comparison to the other Khan. King Khan witnessed an audience growth of 0.58 per cent as compared to Salman’s 0.45 per cent. Add to this, the actor’s interaction figures are also impressive, which has partly to do with the buzz surrounding the release of Jab Harry Met Sejal. 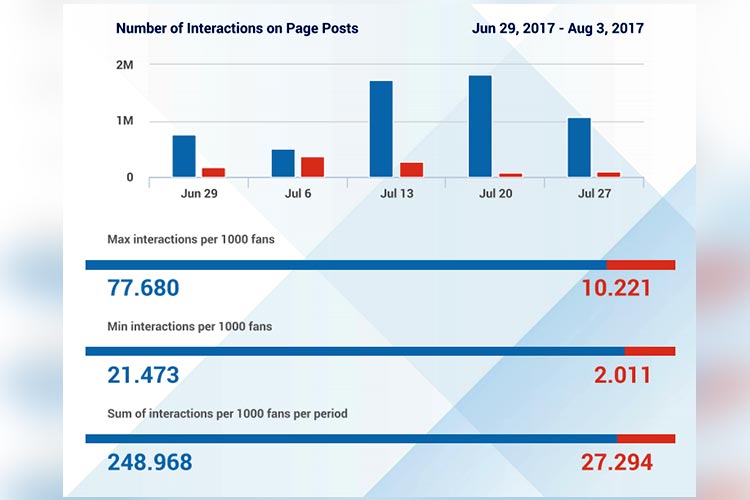 A comparative analysis between Shah Rukh Khan and Salman Khan in terms of their interactions with followers. (Source: Social Bakers)

Adding further, Shah Rukh’s most successful pic was a selfie posted on July 21 that yielded 4.27 lakh interactions. At present, it boasts of 3,404 shares and more than 7,500 comments.

Meanwhile, Salman posted a picture with Varun Dhawan, David Dhawan, Sajid Nadiadwala, Jacqueline Fernandez and Taapsee Pannu on July 8, which had 2.91 lakh interactions including 1,840 shares and more than 4,600 comments.

Besides promoting Jab Harry Met Sejal, Shah Rukh is shooting for Aanand L Rai’s untitled film, wherein he will share the screen space with Katrina Kaif and Anushka Sharma yet again. Salman Khan will also make a cameo appearance in the film.