Saif Ali Khan is not on any social media platform. The actor was recently seen in Rangoon, a Vishal Bharadwaj’s war drama which also featured Shahid Kapoor and Kangana Ranaut in the lead. The film has not been received widely well by the audience. And according to the actor’s fans, the reason is ‘the worst actor’ and ‘Bollywood’s most arrogant lady.’

Saif Ali Khan’s fan club on Twitter, known as Saifians, has officially disassociated itself from the film announcing that the reason of its failure is Shahid Kapoor and Kangana Ranaut. For them, their favourite actor, Saif Ali Khan had contributed precious 20 minutes of his life to the film but the poor performances of the rest of the two actors sealed the film’s sad fortune.

It’s disappointing how a few bunch of people call themselves fans and promote such blame game on behalf of an actor. More saddening is to realise that they are the ‘fans.’ Who are true fans though? Are they the ones who just know to put their actor above everything and everyone? Are they the ones who just know to ridicule and criticise the contemporaries of the actor they preach? No. A true fan never gets into demeaning business. He celebrates the achievements of his star but not at the cost of someone else’s failure.

Any film is a product of equal labour of each person associated with the film. Right from an actor, director, writer, musician to researchers, set designers and other technicians, it’s a concoction of efforts put in by all these people. Saif is not a kid. He must have liked the script or at least his part in the story and therefore, would have agreed to do the film. Why would he go on a promotion spree for Rangoon if it’s a product that he is so ashamed of (as Safians are portraying)? What is also totally disgusting is to see how these so-called fans of the Omkara actor claim that Saif did the film to save Shahid’s career. Even though most people do not take these fan clubs seriously, the fact that a few brainless honchos take disadvantage of a star’s name like this, definitely needs to be taken notice of. Here’s their official statement. Let us know if this means anything to you even after ignoring the big grammatical blunders. 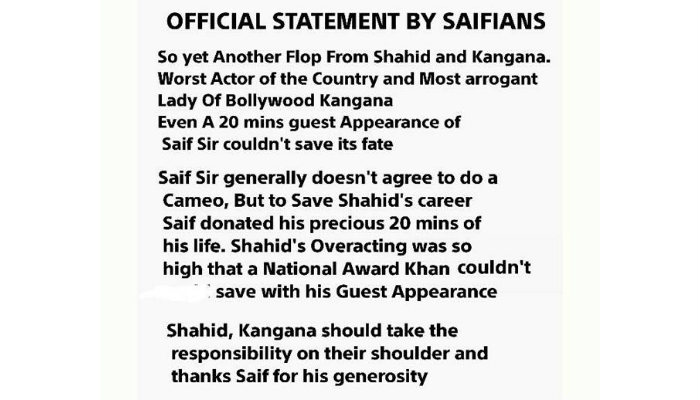 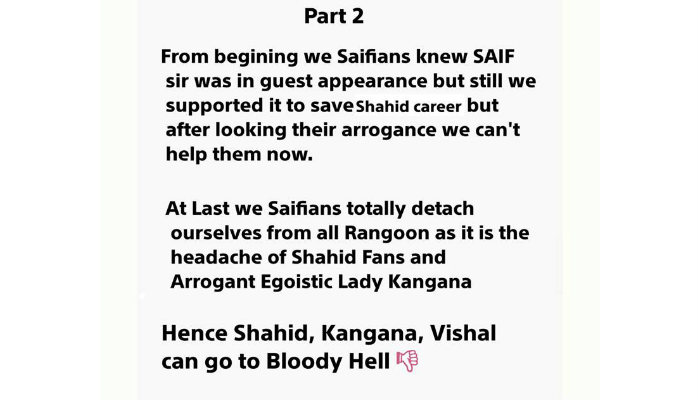 Also, such people are one of the reasons why celebs should register their presence on the social media. Saif, you too.