Sachin Tendulkar’s much-awaited biopic Sachin: A Billion Dreams is just two days away from a gala theatrical release and the world just can’t stop talking about it. His fans have taken to social media, sharing memorable moments when the batting legend enthralled everyone with his performance. Ahead of the film’s release, we thought of sharing an interesting anecdote revealed by the Bharat Ratna awardee himself.

His fans would remember his iconic uppercut six off Pakistani speedster in the crucial pool match of ICC World Cup 2003 at Centurion Park in South Africa. India went on to win the match by six wickets and ended as runners-up in the tournament. The Pool A encounter was held amidst heightening tensions between the two countries and the players were under tremendous pressure. The Men In Blue bore the brunt of public anger right at the start of the tournament after losing to Australia by nine wickets. The houses of cricketers including Sourav Ganguly, Mohammad Kaif, and others were also vandalised.

In his autobiography Playing It My  Way, the 44-year-old cricketer wrote: 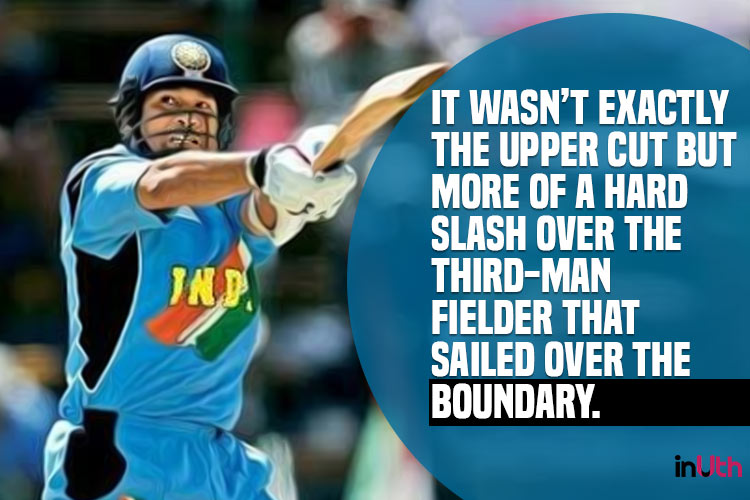 Sachin Tendulkar scored a memorable 98 runs off 75 deliveries to set up an Indian win. Later, Rahul Dravid and Yuvraj Singh scored half-centuries as they took India home. Check out the video of Sachin’s memorable six off Rawalpindi Express.

Sachin: A Billion Dreams has been directed by James Erskine and will hit the theatres on May 26. It has been produced by Ravi Bhagchandka and Srikant Bhasi. The film chronicles the batting legend’s journey right from childhood to become the ultimate sporting glory until his retirement. Having made his debut in 1989, Sachin represented India in 200 Tests and 463 One Day Internationals. He also holds the record for maximum centuries in international cricket – 100.