Reema Lagoo, 59, who died today, was the epitome of what a sanskari Indian mother should be like. She looked almost the same in all her films, at least the popular ones. Her cotton and silk sarees, her very likable roundish frame, her divine smile, her caring embrace — all reassuringly familiar traits that we we associate with mother’s love or mamata, remained intact. In fact, the size of her bindi too remained as it is. There were hardly any movies where she wore her hair lose. Although in real life she flaunted her thick-black hair with elan.

The lucky mother of the Khan trinity

Often an artiste is restrained by stereotypes. It can be quite frustrating to play similar role films after films. But Bollywood is an exploitative industry and often the more talented an actor, the lesser the scope for them to do something worthy with their talent on-screen. But Lagoo upped the game every time she took over the screen as mother. Despite being handed down the same kind of roles, she brought some freshness to it. And most importantly, you could see her heart was in it. She played mother to the Khan trinity at different stages in her career. She began with playing Aamir Khan’s mother in Qayamat se Qayamat Tak. Perhaps, she was a lucky charm for the Khans. Qayamat Se Qayamat Tak, Aamir’s debut film as a lead actor, made him an overnight star. With this film’s success began Lagoo’s journey as a mother. She would soon play mother to Salman Khan in his debut film, Maine Pyar Kiya, with which the second pillar of the Khan triumvirate tasted instant superstardom.

Again she teamed up with Salman Khan and gave us ‘Hum Saath Saath Hai’. This time she was not the sacrificing mother but the jealous mother who ends up breaking her family due to her unfounded insecurities.

At a much later stage in her career, she played mother to Shah Rukh Khan in Kal Ho Na Ho, which also went on to mint money at the box office.

‘Progressive’ mother to Madhuri at the age of 36

Among all her roles as mother, perhaps, her portrayal of Madhuri Dixit’s mother in Hum Aapke Hai Kaun stands out. Lagoo was just 36 when she played the role of Madhuri Dixit’s mother. And she was every bit convincing. In the family drama, which endorses and almost imposes all kind of traditional norms on its audience and its characters, perhaps, the only progressive streak, even if a fleeting one, was seen in Lagoo’s character. In the film, Lagoo chooses a professor (played by Anupam Kher) over a  rich businessman (Alok Nath). The three were friends. But this change in equation didn’t spoil their friendship. Years later , when fate brought the duo at cross-roads, this time as ‘samdhi-samdhan’, she doesn’t shy away from acknowledging their complex relationship. Alok Nath, in the presence of Anupam Kher takes the liberty of indulging in some light-hearted flirting with his former crush and surprisingly Lagoo blushes, instead of looking at it as something inappropriate. In fact, the song that ensues, perfectly captures the quirks of their relationship.

And just when Alok Nath was going overboard showering compliments on his ex-flame, he immediately brings in Anupam Kher in the equation to ensure that the situation remained under control.

Despite the presence of the ultra glamorous and the much-younger Madhuri Dixit in the same frame, in this particular song, Lagoo looks beautiful, exuding the pink glow of youth. Lagoo’s eyes light up with teenager-like excitement brought about by sudden attention from a man who once loved her. She does all this without any loud expressions or over-acting.

The climactic scene in Mother India where Nargis kills his reel son Sunil Dutt continues to be one of the most iconic scenes of Indian cinema. Interestingly, Lagoo had her own Mother India moment. And the one who fell prey to her bullet was Nargis’ son, Sanjay Dutt. In the critically acclaimed Vaastav ,it’s Lagoo who shoots her gangster son point blank to end his criminal activities. After killing him, in an extremely emotional and heart-touching scene, Lagoo says, “Maine use maara nahi, maine use mukti di hai. Mar to woh bahut pehle gaya tha. (I didn’t kill him, I just gave him peace. He had died long back).” 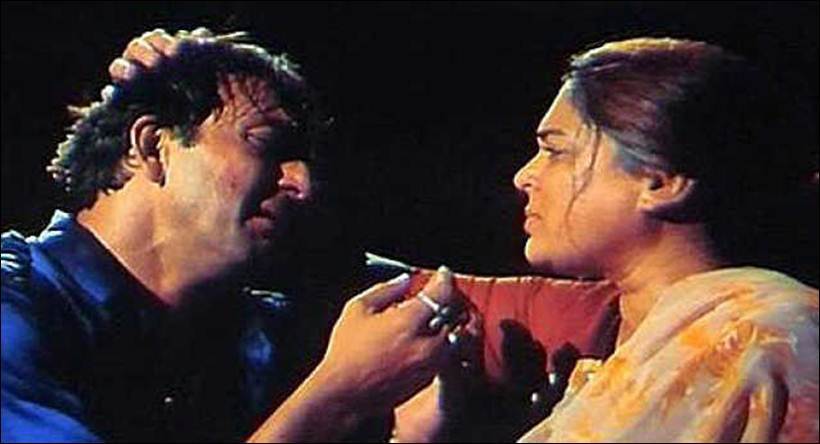 Govind Nihalani’s Aakrosh set a benchmark in filmmaking and story-telling and remains one of the most critically acclaimed films of the parallel cinema movement of the 80s. With stalwarts like Naseeruddin Shah and Om Puri giving their best performance in the film, not many remember the tiny role that Lagoo played. She was a nautanki dancer. She looked drop-dead gorgeous in her magenta saree and performs lavni like a dream.

You have to watch it to believe it.

In Rihae, which had Naseerudding Shah and Hema Malini in lead roles, Lagoo’s small role as a sex-deprived mother of two stands out. Her role was used by the filmmaker as one of the many example to depict how migration affected the lives of women, who are left with their kids in villages. In sharp contrast to her popular image, Lagoo, in fact, had an intimate scene with Shah in the film

With her demise, we definitely have lost a powerhouse actor. She will be missed not only by the grieving industry people and the older generation, who have had the opportunity of watching her as a more versatile actor. But even millennials would miss her as  they have grown up watching her play mother to Shah Rukh Khan and the Salman Khan in all their favourite films.