As the man got off his seat to go on the stage, he planted a kiss on Deepika’s cheek. The various fan clubs of the two star are going gaga over this PDA as there were reports suggesting that DeepVeer has broken up. It should also be noted that both the actors also walked hand-in-hand as they came out of the grand Ambani bash happened in Mumbai a few days ago. 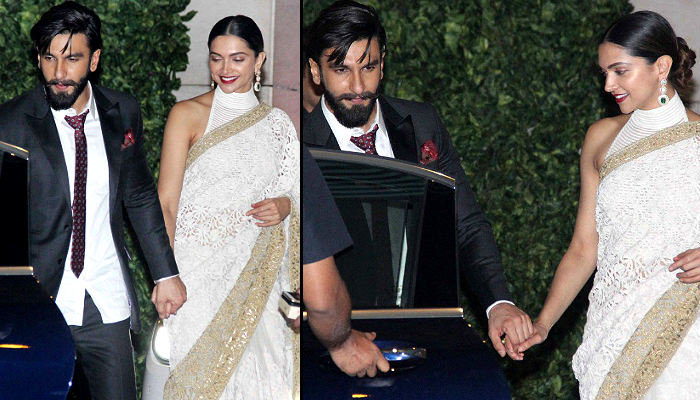 The clips from the event and their pictures are being shared on the internet. And why not? Internet is one happy place to be at, barring trolls.

For the event night, Deepika chose to wear a sharp Monisha Jaising tuxedo suit. Her monochrome look was accompanied by the straight hair, smokey eyes and a statement Bulgari neckpiece.

On the work front, both Deepika and Ranveer are gearing up for their upcoming — Padmavati, which is another historic drama by Sanjay Leela Bhansali. The film also features Shahid Kapoor in a pivotal role. Check out these photos of the two from the Esquire event in Dubai:

#DeepikaPadukone and #RanveerSingh together at the Esquire Awards 2016 pic.twitter.com/l84oM0plC4