In what has been termed as Bollywood’s (overdue) #MeToo movement, the resurgence of Tanushree Dutta’s allegations of sexual harassment against Nana Patekar on the sets of Horn Ok Pleassss in 2008 continue to make headlines. However, while several might claim that Dutta did it all for publicity, the actress really did end up with the shorter end of the stick.

Recently, the 35-year-old actress, in an interview with Zoom TV, recounted what transpired that day in Filmistan when her car was blocked and smashed by a mob as she attempted to walk out of a shoot. She said, “He (Patekar) was very aggressive, and was pushing me around and misbehaving with me on the set. My complaint was not heard. He also demanded to do an intimate step with me even though it was my solo dance. It was total harassment. Everyone knows about how he has always been disrespectful towards women. People in the industry know about his in the background that he has beaten actresses, he has molested them, his behaviour with women has always been crude but no publication has printed anything about it.”

Patekar’s legal representative Rajendra Shirodhkar reportedly sent a legal notice to Dutta, accusing her of falsely accusing the actor and even demanding a written apology. Patekar will also be holding a press conference as soon as he returns to Mumbai. 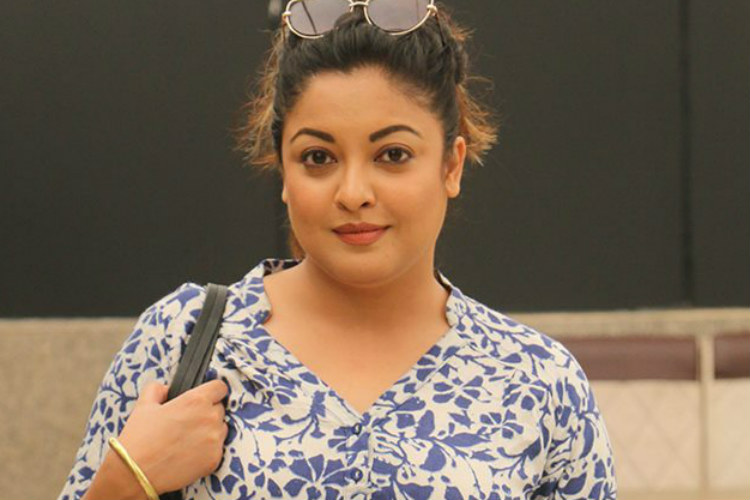 However, Dutta has said that she has not received any such notice. Speaking to News18, Dutta said, “I have not received any notice. These threats are put so that others like me would be scared to come forward.” She added, “There are big media houses standing in solidarity with this movement. An excellent time to take these remorseless men to task and send a strong message in the society.”

Rakhi Sawant, who eventually replaced Dutta in the movie, also refuted the latter’s claims, and asked her to leave the country for “defaming the film industry”.

“I will tell every media person here how you steal money in the US and use drugs,” Sawant said in an explosive statement, adding that Dutta has “gotten fat from excessive use of drugs”.  Sawant also pointed fingers at Dutta’s character, referring to her intimate scenes with co-star Emraan Hashmi, and asked her for proof to support her allegations.

Incidentally, a video of the incident had also surfaced online, wherein a mob could be seen attacking Dutta’s car. However, there have been debates over the veracity of the viral footage, with some claiming that the video clip is of a different incident altogether, and is not connected to the Dutta-Patekar controversy.

Cameraperson Pawan Bharadwaj, who can be seen attacking Dutta’s car with his camera in the clip, told The Quint that Dutta’s father had broken his camera and her team attacked the Sahara reporter who accompanied him. He said, “I was angry that my camera had been destroyed, I was worried about my job and so I demanded a compensation, but they did not listen to me, so I started hitting the car with my camera in my frustration.”

However, journalist Wasim Akhter, who also reportedly witnessed the ordeal, told Zoom TV that the camera was damaged in an accident and said that Bharadwaj lied to instigate the mob against Dutta.

He said. She said. They watched.

Dutta had earlier also raised the question of why Bollywood chose to remain silent over the matter. While several actors eventually did speak out — after two eyewitnesses, journalist Janice Sequeira and film assistant director Shyni Shetty, corroborated the allegations — several bigwigs still dodged the controversy.

At a press conference, Salman Khan was questioned by an AajTak journalist about his stand on the matter, to which, he said, “I am not aware of this. Let me know and understand what is happening. I have been here and I am sure that the legal team will handle that. We will see what is going on. I am not aware of it.” Khan later also cracked a joke, saying that the panel wouldn’t be taking questions from the corner of the hall where the journalist had been sitting.

In a statement, Dutta also lashed out at Amitabh Bachchan, saying that she felt “hurt” adding that “these are people who do movies on social causes”. She told Hindustan Times, “They play roles in films and the audience applauds. But when it comes to standing up and doing something about what is happening in front of you, there are these evasive statements that don’t make sense.” The 75-year-old actor had earlier evaded a question on the Dutta-Patekar controversy by saying, “Neither is my name Tanushree Dutta nor Nana Patekar.”