Raees is all set to hit the screen on January 25. Featuring Shah Rukh Khan, Mahira Khan and Nawazuddin Siddiqui in pivotal roles, the film is directed by Rahul Dholakia and produced by Red Chillies Entertainment and Excel Entertainment. With the trailer of the film generating enough curiosity around the film, the makers are trying hard to keep everything in the place.

The female lead of Raees — Mahira is a Pakistani actress. In order to make sure that her association with the film doesn’t cause hindrance in the smooth release of the film in India, Shah Rukh Khan met MNS chief Raj Thackeray the other day. It was decided that Mahira will not be a part of Raees’ promotional campaigns in India. Just a few days back before this meeting, Raees trailer got launched and received immense appreciation. The chemistry between SRK and Mahira got highlighted and we, in fact, praised him for giving the actress enough screen space in the trailer. During the launch event itself, Raees team had claimed that they don’t think Indian government will have any problems in letting Mahira visit our country. Producer Ritesh Sidhwani said:

I think we’ll start promotions and if we find it necessary to involve her and bring her here, we will do it. I don’t think there will be any restriction for her from government and it won’t be a problem to issue her a visa. We will decide about her involvement. 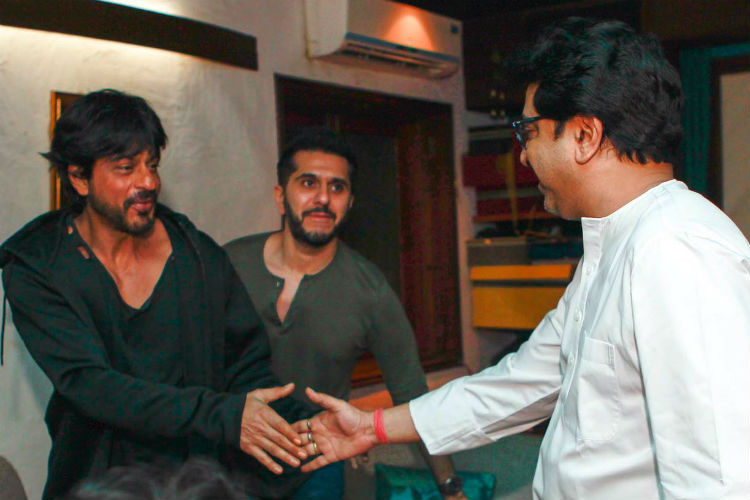 What is important to notice here?
Why did SRK need to meet Mr Thackeray to discuss Mahira? Who is Mr Thackeray to interfere in the state’s decisions? Even if SRK needed to get a clarification over Mahira’s participation in Raees’ promotions, why didn’t he approach the Chief Minister Devendra Fadnavis? Does this mean that the leader of a so-called influential party has become bigger than the state itself?

What does this show?
Why do you decide to discuss your matter with somebody else? Because the viewpoint of that person holds some value for you or because you think that the person’s decision will help you clear your stances on the issue? So in this case, when SRK met Thackeray, it showed that Mr Thackeray’s say in whether or not Mahira should be a part of Raees’ promotions in India, matters to him.

Why are we becoming puppets of people who consider power as an authority?
Shah Rukh Khan is King Khan. A man with the stature of superstar and the one whose films provide the maximum of business to the film industry. If a man with such a stature will confirm and bow down to the illegitimate structure of self-acclaimed powerful people in the state, who else can we expect to fight and win? If he didn’t shy away from introducing Mahira in the trailer of his film, why is he shying away from bringing her for promotions in India?

The big question
It would have still been acceptable had it been the film team’s sole decision. Why did they have to take a decision under the influence of a political leader who, by the way, might be a powerful man, but he is NOT the state?

Our advice:
Dear superstars, it’s your film, your co-actors. It should be your decision to involve Indian, Pakistani, Sri-Lankan, Bangladeshi, Chinese actors/ actresses for promotions. Enough of a** licking.

Also read: Look for faults and you’ll find none in Raees trailer