Released on June 9, 2017, actors Sushant Singh Rajput and Kriti Sanon starrer Raabta has managed to collect Rs 15.93 crore on day three of its release. Featuring the duo for the very first time together in the film, Raabta failed to impress critics as well audiences. The film did a business of Rs 5.61 crore on its opening day, following on day two of its release, the film has managed to collect Rs 5.11 and on day three the total number now stands at Rs 15.93 crore. Raabta shows a nice growth despite negative reviews.

The movie is produced by Bhushan Kumar of T-Series and Homi Adajania apart from Dinesh Vijan, who has also directed the film. Featuring Sushant as Shiv and Kriti as Saira, the film gave the audience a chance to capture the duo’s tribal avatar. Though the trailer of the film was received well by the viewers, Sushant and Kriti’s on-screen pair failed to impress the audience.

The film also features actress Deepika Padukone in a special dance number. Apart from Deepika, the film also has Rajkumar Rao in a never seen before avatar, as he essayed the role of a 324 years old. The film narrates the love story of Sushant Singh Rajput and Kriti Sanon’s characters. The film connects two different eras.

Also Read: Raabta movie review: Sushant Singh Rajput and Kriti Sanon’s chemistry not enough for this movie to sail through

Tweeting the exact figures of the film, trade analyst Taran Adarsh took to Twitter and wrote. Check out here: 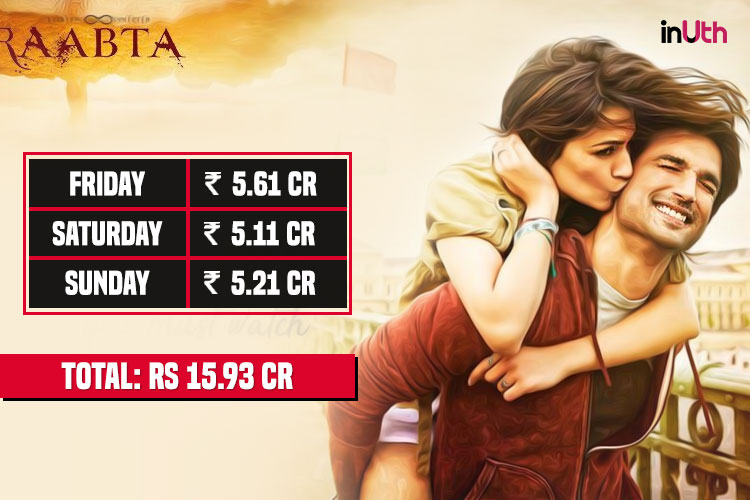 On the work front, Sushant Singh Rajput was last seen in M.S. Dhoni: The Untold Story. The film was based on the real life story of cricketer MS Dhoni. It also featured Disha Patani and Kiara Advani.