Priyanka Chopra, the actress who is busy putting India on the global map is also doing wonders on social media. After having close to 20 million followers on Instagram, the actress has also now become the Indian actor with the fastest growing Facebook page in India. Priyanka Chopra has a fan base of around 31 million on Facebook, until the month of June, and it’s growing rapidly.

According to the Facebook data analysed by Social Bakers, the fan following of the Baywatch star on Facebook is growing by 1487 fans per day. The actress, who was last seen in Bollywood in Prakash Jha’s Jai Gangaajal, hasn’t really been working in the Hindi film industry for long. However, this hasn’t lead to any dip in her popularity here at home. In fact, she’s also the top fourth Indian celebrity with the highest Facebook fan base after Virat Kohli, Salman Khan and Deepika Padukone. Check theses out:

Also read: Fawad Khan is NOT the most popular actor in Pakistan. Google Trends says these three Indian actors are 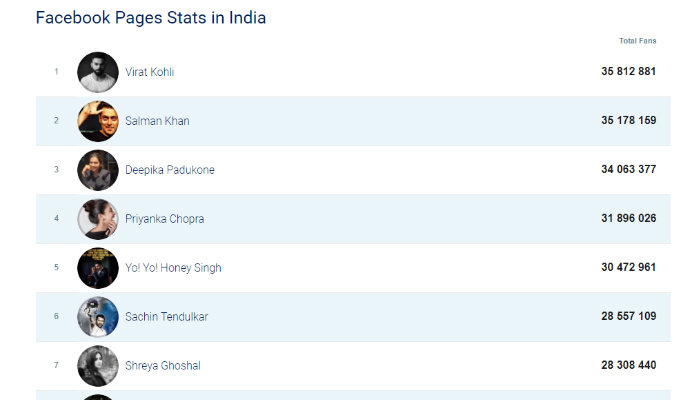 Priyanka Chopra Facebook fan base according to Social Bakers 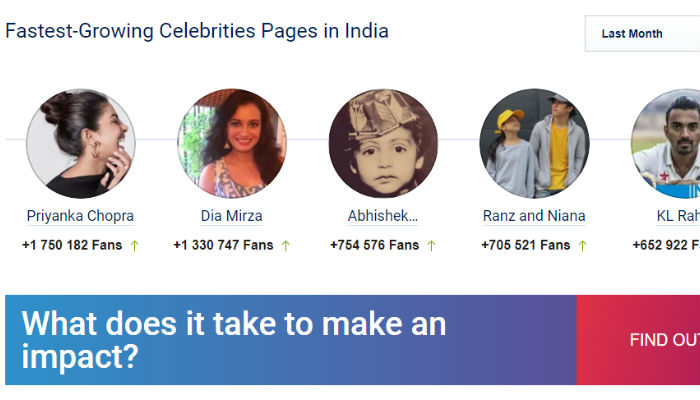 Priyanka Chopra’s growing Facebook fan base according to Social Bakers

What is also exciting to see that despite Priyanka’s growing popularity in the US, it is Bangladesh which registers the maximum number of fans after India. Check out this interesting data:

Also read: Who is a bigger star on Facebook, Salman Khan or Shah Rukh Khan? Here are the results 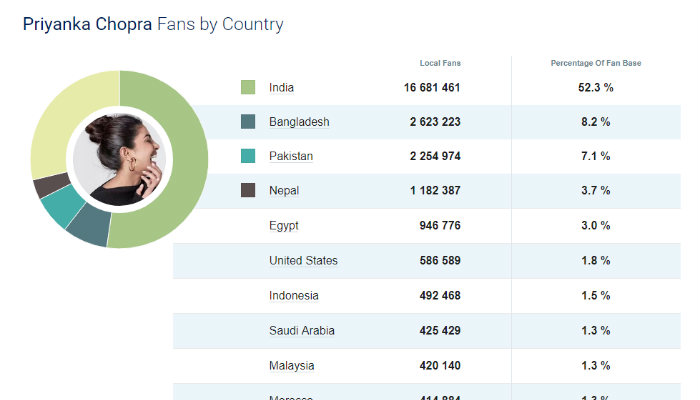 Priyanka Chopra Facebook fan base as per countries on Social Baker

On the work front, Priyanka is rumoured to be a part of the Kalpana Chawla biopic, while she’ll also be working on the next series of ABC’s Quantico. It should also be noted that the actress’ next Hollywood film has her playing a mother in the celluloid adaptation of A Kid Like Jake. She’s also going to act in Todd Strauss-Schulson’s Isn’t It Romantic.