The Ek Paheli Leela actress is active on social media and keeps her fans informed by posting pictures and latest updates. Sunny recently shared a picture with husband Daniel Weber where both are seen enjoying a quality time in each other’s company.

Be it an award shows or any media events Sunny has always been accompanied by her husband and needless to say the duo look super cute together. 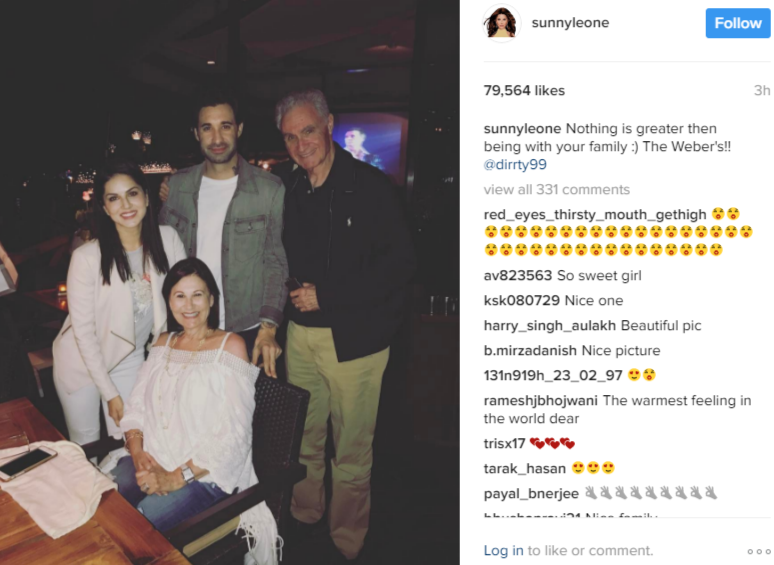 Posting the image on her insta feed, Sunny wrote: /sunnyleone/Nothing is greater then being with your family 🙂 The Weber’s!! @dirrty9. Dressed in casuals, Sunny looks stunning as always in the picture.

On the film front, she has films like Tera Intezaar, Noor, Baadshaho in her kitty.  While Noor and Baadshaho will see Sunny in a cameo experience, Tera Intezaar features Sunny in a lead role starring opposite Arbaaz Khan. After working with stars like Shah Rukh Khan, Tusshar Kapoor and others, this is the first time both Sunny and Arbaaz are working together for a film.

Meanwhile, Sunny is expected to attend the Canadian pop star Justin Bieber’s debut concert in India as part of his Purpose World Tour in May. Apart from Sunny Leone, actress Sonakshi Sinha has been confirmed as one of the celebrity performers at Justin’s concert.