Neil Nitin Mukesh is getting married on February 9. Yeah, the same actor whom you must have trolled for his name. More than that, he is known for his performance in films like Jail, Johnny Gaddaar and Wazir. Recently, he shared his wedding invitation card which has gone crazily viral. And trust us, it is just so elegant.

The wedding card has couplets of the song Ek Pyaar Ka Nagma which was sung by legendary playback singer Mukesh, who is Neil’s grandfather. The actor wanted to pay tributes to him on the occasion, so he chose the melodious song from the 1972 film Shor. Interestingly, Mukesh won the Filmfare Award for Best Playback Singer. When asked about this, he told Indian Express:

Everything starts and ends with Mukesh in our upbringing and the entire conceptualization for the invite came from my father and my mother. It is like a series of love ballads springing to life and I’ve already received so many calls from well-wishers telling me how much they have loved the thought behind the invite.

The wedding card was shared by actor Arti Chabria on Twitter, which received accolades from Twitterati. Neil and Rukmini got engaged in October last year. They will tie the knot in Udaipur on February 9.

What an awesome #weddingcard!Heartfelt congratulations 2 ur entire fly & U. Loadsa love to this cutest couple ~ Rukmini & @NeilNMukesh pic.twitter.com/kTAHj3IIAb

Have a look at the picture of the invite. 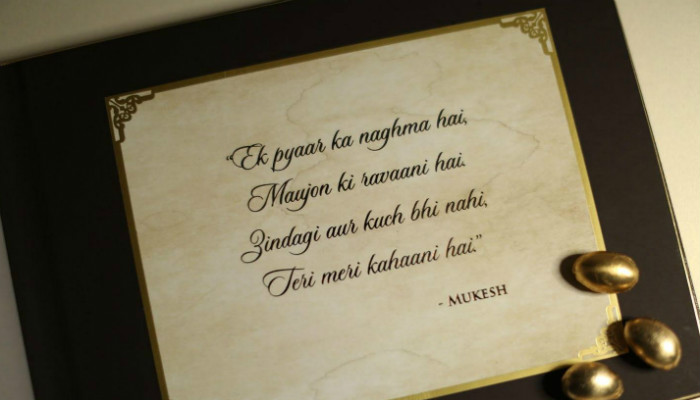 We wish the couple a happy married life.