Recently, there were reports of veteran actor Vinod Khanna being hospitalised after complaining of severe dehydration. His son Rahul Khanna issued a statement that his dad was doing well and would be discharged soon. The 70-year-old actor will be playing the king of Gwalior in the upcoming film Ek Thi Rani Aisi Bhi, said to be based on the life of Jana Sangh leader Vijaya Raje Scindia.

Just when his fans were relieved on hearing the news of his recovery, a picture doing rounds on social media has come as a rude shock. Seen in the photo is a frail old man in hospital robe along with his wife and son. Sadly, he is none other than Vinod Khanna. The same heartthrob of the yesteryear who would leave women swooning over his looks. While the entire nation was grappled with the superstardom of Amitabh Bachchan, Vinod Khanna carved a fan following of his own. He mostly dabbled in action flicks as the roles were suited to muscular physique and heavy voice. 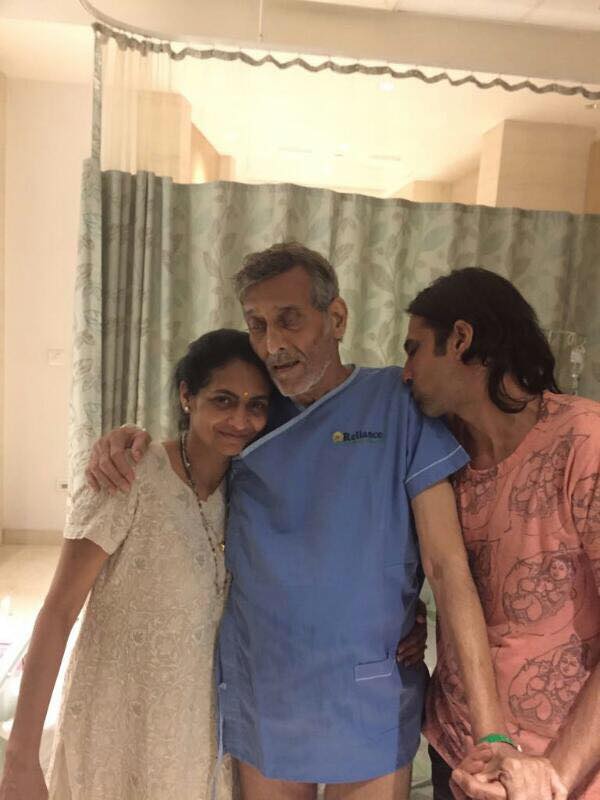 Be it his role of Vishal in Muqaddar Ka Sikandar, gangster Shakti in Dayavan or Prajapati Pandey in Salman Khan’s Dabangg, Khanna excelled in whatever role he was offered. The confrontation scene between Amitabh Bachchan and Vinod Khanna from the Manmohan Desai-hit Amar Akbar Anthony is still afresh in our minds.

Not only did Khanna rubbed shoulders with Big B in this directorial flick, but also outshone him in some scenes as well. The millenials will remember the scene in Wanted, wherein he proudly reveals the true identity of his son (Salman) to dreaded gangster Gani Bhai (Prakash Raj).

Besides an illustrious career in films, Vinod Khanna also excelled in the corridors of power as well. He is a four-time MP from Gurdaspur in Punjab, and also served as a minister in Atal Bihari Vajpayee-led NDA government. Although he lost in 2009 polls, he emerged victorious in 2014 Lok Sabha elections. Isn’t it a fantastic feat?

Khanna was last seen essaying the role of gangster Randhir Bakshi in Shah Rukh Khan starrer Dilwale. His avatar in the Rohit Shetty directorial was a far cry from how he looks in the film. It is a stark reminder to how his contemporary Rajesh Khanna at his old age.

Kamaal karte ho Prajapati Pandey ji. Our prayers are with you and hope we get to see you in action soon.