Central Board of Film Certification chief Pahlaj Nihalani has been sacked from his position. It is being suggested that ace lyricist Prasoon Joshi will replace him. Reports suggest that as soon as Nihalani was sacked from the position, the hall cheered. Nihalani’s tenure as the chief of CBFC has been quite controversial. He became famous for chopping off scenes from the movies and posing problems for filmmakers.

The news would have definitely made many filmmakers happy. During his tenure, Nihalani has run-ins with many. His ways of functioning got the censor board the name of ‘sanskaari board’. He gave outrightly weird reasons for chopping off scenes from films, hurting religious sentiments, was one of the most common reasons.

In 2016, during the release of Udta Punjab, Pahlaj Nihalani led board made it to the news for all the wrong reasons. He had demanded over 80 cuts in the movie, following which many people from the film fraternity stood against the board. Many were of the opinion that the job of CBFC is to certify films and not cut scenes according to their wish. After this controversy broke, the makers of this Shahid Kapoor- Alia Bhatt starrer approached the Mumbai High Court and won the case. 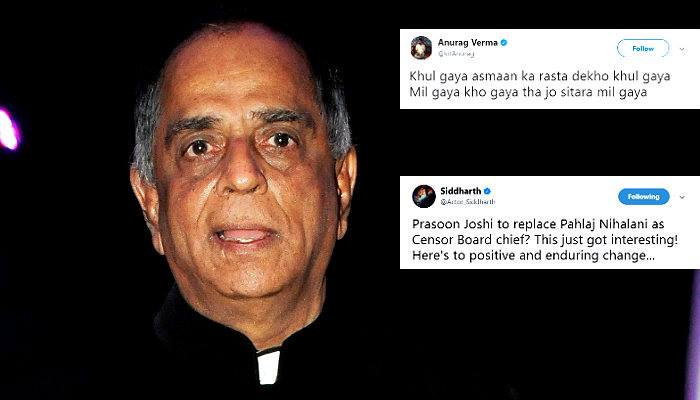 Also read: Pahlaj Nihalani does not want superstars to ‘drink and smoke’ in films. Read details

As soon as the news of Pahlaj Nihalani being sacked surfaced, Twitter erupted with reactions. Check out few of them here:

#PahlajNihalani gets an `A’ certificate from CBFC. `A’ for Axed. Prasoon Joshi to replace him

#PahlajNihalani replaced by Prasoon Joshi as the Censor Board Chief.