A team from Sanjay Leela Bhansali’s production house and Karni Sena held a press conference in Jaipur today to set the record straight on the alleged distortion of facts. In the press conference, Bhansali’s team clarified that there was never a sequence in which Padmavati dreamt of romance with Alauddin Khilji. Shobha Sant, the CEO of Bhansali Productions added that they have been going about with the things with a right approach

In the press conference, the members of the Karni Sena put forth a demand that the movie’s name should be changed. They asserted it cannot be Padmavati. To this Shobha said that it wasn’t in her jurisdiction to change the name. However, Shobha added that the people in Rajasthan would be proud after seeing the movie.

While it may seem that the conflict has reached a consensus, there are members of the Karni Sena who are reported to be objectifying it. These members want production of the film to be scrapped. It is still unclear if Karni Sena will give in to the demands of its own members or not. 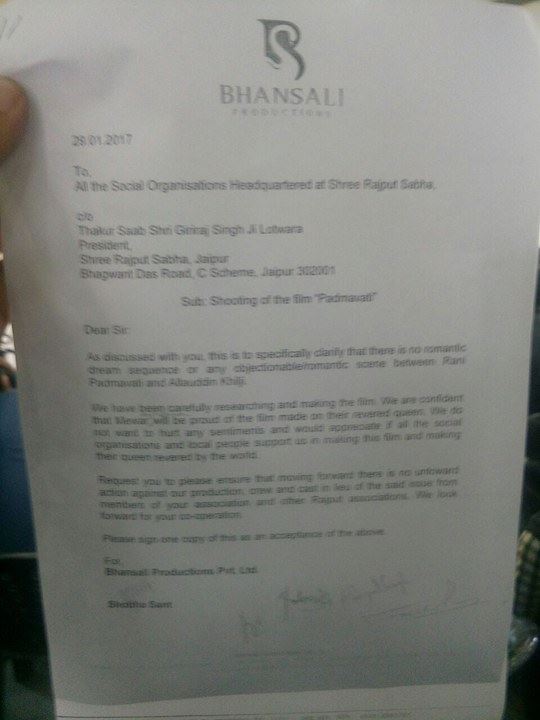 A copy of letter from Bhansali productions

The conflict between Karni Sena and SLB made way for national debates when members of the right-wing group interrupted the shoot of Padmavati. Alleging that the facts were changed in the film, they destroyed the sets and also assaulted the filmmaker. Soon after a video of Karni Sena members slapping SLB and pulling his hair surfaced, that drew flak from film industry. The members of Bollywood in unison demanded strict actions  against the goons. In very strong words, Bollywood said this kind of behaviour was unacceptable and that film makers shouldn’t be bullied like this.

After a lot of fiasco around it, this agreement between Bhansali and Karni Sena might pave a smooth path for Padmavati.