First a gimmicky challenge that generously sacrificed sanitary pads at the altar of photo-ops, and then allegations of plagiarism by film-writer Ripu Daman Jaiswal has cast a shadow of Akshay Kumar and Twinkle Khanna’s PadMan. 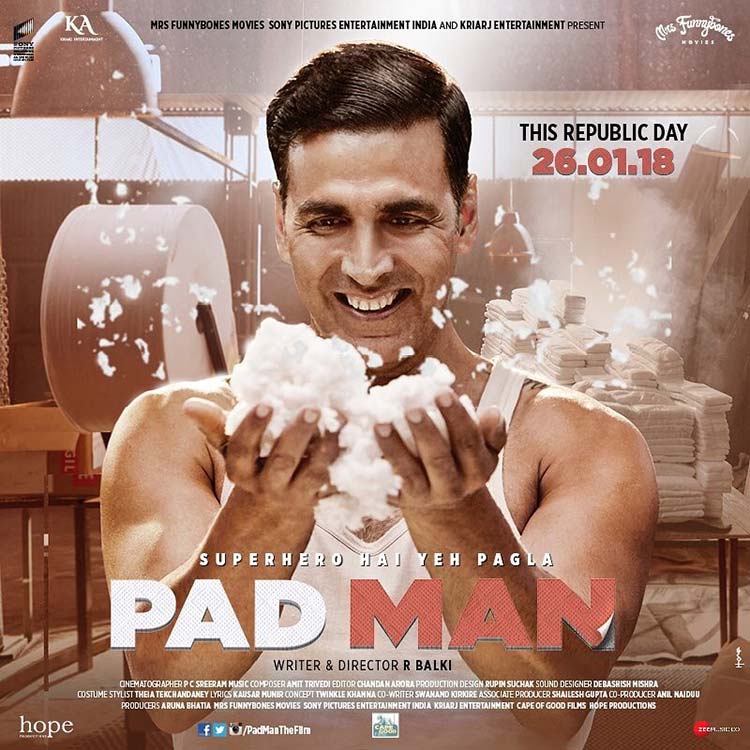 Jaiswal, who says he’s filed an FIR against Akshay and the filmmakers, alleges that PadMan is eerily similar to the script he wrote and sent to Karan Johar’s production company in 2016. On December 20, 2017, Jaiswal wrote a Facebook post sharing screenshots of the summary he had mailed to Ryan Stephan, one of the creative heads at Dharma Productions.

Jaiswal, whose script was based on Arunachalam Muruganantham’s work but had elements of fiction in it, registered the film on 5 December. On 16 December, he heard the announcement that Twinkle Khanna’s production company was making a film based on Muruganantham’s life with Akshay Kumar.

Talking about the similarities, Jaiswal wrote, “Recently, PadMan trailer released, and most of the scenes have been taken from the summary I had sent to Mr Ryan Stephan. Yes, they even copied my fictional scenes (Check out the Rakshabandan scene. In real life, Arunachalam Muruganantham has no sister.)”

Jaiswal claims that there are 11 scenes in the film that have been taken from his script. The screenplay of PadMan is credited to R Balki and Swanand Kirkire.

Balki, who is also the director of the film, scoffed at Jaiswal’s allegations calling it ‘silly’ and ‘foolish’.

“That’s so foolish. After every film, some people foolishly make these claims. My film is an official biography of Muruganantham. Is he accusing Muruganantham of leading a life that has been copied from his writing? That’s so silly,” he said.

Intermission of PadMan. 11 scenes has been copied from my script uptil now and even one of the character. That’s it. I am definitely going to court.

But Jaiswal doesn’t buy Balki’s claim that PadMan is a biography. Talking to InUth, he said: “If Mr Balki has made a film on Muruganantham’s life, then what’s a fictional character named Pari  (named Runji in my original screenplay), played by Sonam Kapoor, doing in someone’s biography?”

I remember I was in the library when I wrote this dialogue and was truly elated. Honestly, I surprised myself that day. Tell me, how on earth can you steal someone’s dialogue?
This is unfair.

Not only has the writer accused the filmmakers of lifting scenes and dialogues from his script, Jaiswal says also wants to  accusing them of ‘not making the film honestly’.

“Apart from the copied scenes and dialogues, I am accusing Mr Balki of not making the film honestly, for taking my fictional character and doing injustice to the story of an honest man who single-handedly invented a low-cost sanitary pad machine against all odds… you can’t use a fictional character in someone’s biography to make an entertaining film”, he said.

Calling inclusion of fictional characters in a biopic ‘contradictory’, Jaiswal further said, “Imagine if Richard Attenborough, who made a biography on Gandhi ji, using fictional dialogues, scenes and characters to make an entertaining biographical film – and would still call it a biography. Would you accept that label, tell me?”

As per reports, when Senior Police Inspector of Cuff Parade, Mumbai was contacted, Rashmi Jadhav said that they had indeed received an application from Jaiswal claiming copyright of his script but ‘no offence has been registered in this case’ as yet.

Also read: Meet the man who inspired Akshay Kumar’s Padman, the one who made sanitary napkins

Neither Akshay, not Twinkle have responded in any way to Jaiswal’s allegations.