Tanhaji‘s antagonist, Saif Ali Khan, has some interesting things to say about his hit film’s problematic politics. That, you probably know thanks to trending hashtags.

Starring Ajay Devgn, the film that has grossed more than 167 crore since its release 10 days ago, but was heavily criticised for its blatant endorsement of the ‘saffron vs outsider’ narrative. Speaking to Film Companion‘s Anupama Chopra, Khan was quoted as saying “I don’t think there’s any constructive point in arguing about it loudly, unless you’re sure about why you’re doing it. History is the realm of intellectuals. It’s slightly sad that as a part of the intellegentsia, the artists or as a cultural voice of the nation… we’re taking a populist stand. It’s certainly not something I think is great, but it is what it is.”

Asked why Bollywood has witnessed a flurry of saffron-tinted films, Saif responded with – “Well, I would really like to be a part of a Bollywood that takes a stand about not making ‘mass’ kind of movies like these. One that doesn’t mould history to a certain kind of belief. But then people say that this is what runs, and what gives it (the film) the extra kinda’ bump, I mean it’s more than just an action movie. There’s an idea that seems to have caught on. It’s certainly a dangerous idea, I completely agree with you. Have I taken a stand against it? No. Why? I don’t know.” 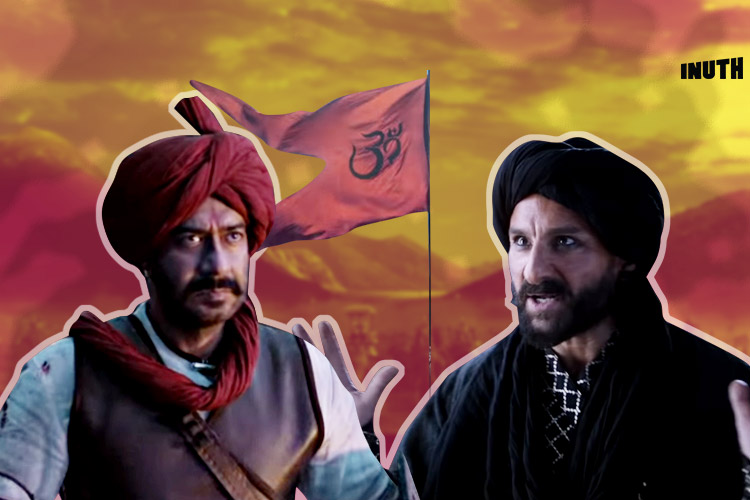 One major point of contention around Om Raut’s film was their liberal use of Swaraj (people’s own rule) by the Marathas, which Saif debunked with zero hesitation – “I was really excited to play the role, but when people say that this is history, then I don’t know if this is history. I’m quite aware of what the history was… and I don’t think there was a concept of ‘India’ till the British came and gave it one.” Tanhaji uses a 17th century battle for the purpose of carving up the country’s communal fabric between ‘us’ and ‘them’.

Khan even spoke about how the idea of secularism was under attack in the current context, something films like Tanhaji was doubling down on. “There were members of my family that left for Pakistan, while there were members that stayed. The ones that stayed believed in the ‘secular’ values of the country. The members that left thought that this wasn’t going to remain a secular country after partition. I fear that it’s taken a couple of generations for the idealists to die, and the direction in which it’s headed right now… is not secular” – he said, going on to add how he would make the selfish choice of ignoring the larger picture.

Asked why more actors don’t discuss it with the requisite frankness, Khan said – “I certainly don’t see anyone fighting for it, and by that I mean… us. Most people don’t think it is worth endangering their career, their family and their lives for. We’re certainly moving away from that, and I don’t know if it was a realistic idea to hold on to that notion for too long.”