At times, what passes off as thoughts and opinions on Twitter, may make you want to question the sanity of the human race. In the past few days, we were witness to the very worst of that. And things got so bad that Rangoli Chandel, Kangana Ranaut’s sister, decided to post this video.

Here’s a vidoe message from Kangana to all the media folks who have banned her, P.S she has got viral fever hence the heavy voice pic.twitter.com/U1vkbgmGyq

In this video, Kangana Ranaut’s disdain for those who criticise her is evident. If a journalist asks any question or criticises Kangana Ranaut in any possible way, he becomes an anti-national. These ‘termites’ (according to Ranaut) seem to be eating into the integrity of the Indian democracy, and attacking India’s unity with their ‘secular and liberal’ beliefs. According to Ranaut, this is also the section of the media that is responsible for disseminating ‘fake news’. Sound familiar?

Ranaut seems to have conveniently forgotten how many members of the so-called ‘liberal’ media stood up for her, when she was cornered for taking on both Karan Johar and Hrithik Roshan. She seems to discount the efforts of many film journalists, who tried to separate the art from the artist and marvelled at the sheer ambition of both Simran and Rangoon

Ranaut doesn’t seem to appreciate how many journalists helped her build this ‘brand’ of a fiercely independent woman, who has gone about her Bollywood career on her own terms. All that’s fine, but how dare you make fun of Manikarnika, the film?

Someone should ask Ms. Ranaut – just because you’ve made a film on a freedom fighter’s valour, criticising it is being disrespectful towards the freedom struggle? What kind of logic is this? To assume that just because the film reporter in question is making fun of Manikarnika, the film (we need to keep making that distinction so that Ranaut knows we are not deriding Rani Laxmibai in any way and are not anti-nationals), that it somehow reflects on his sentiments towards Rani Laxmibai, is, for the lack of better term, a bit far-fetched. As many reviews of Manikarnika put it succinctly – it is a below-par film that tries to squeeze desh prem out of the popular sentiment (these days) of Hindu pride. Can we forget the year Bollywood churned out five films on Bhagat Singh, with varying degrees of success? Does criticising the films amount to disrespecting the valour of Bhagat Singh? Nope.

Kangana Ranaut has put herself on a pedestal of higher reckoning, where any criticism against her becomes an attack on the country. Where she goes around liberally calling out a ‘petty journalist’ for running a smear campaign against her. Why? Because he didn’t like Manikarnika. She claims that the journalist personally messaged her for an interview, and how she was gracious enough to spend three hours with him, even having lunch with him – something that is straight away denied by the reporter. There’s an entitlement that the journalist ‘owes’ the star, because she (apparently) spent time with him. When he coaxes her to show everyone the message to everyone, Ranaut puts away her mic after saying ‘I will show it one day…’. 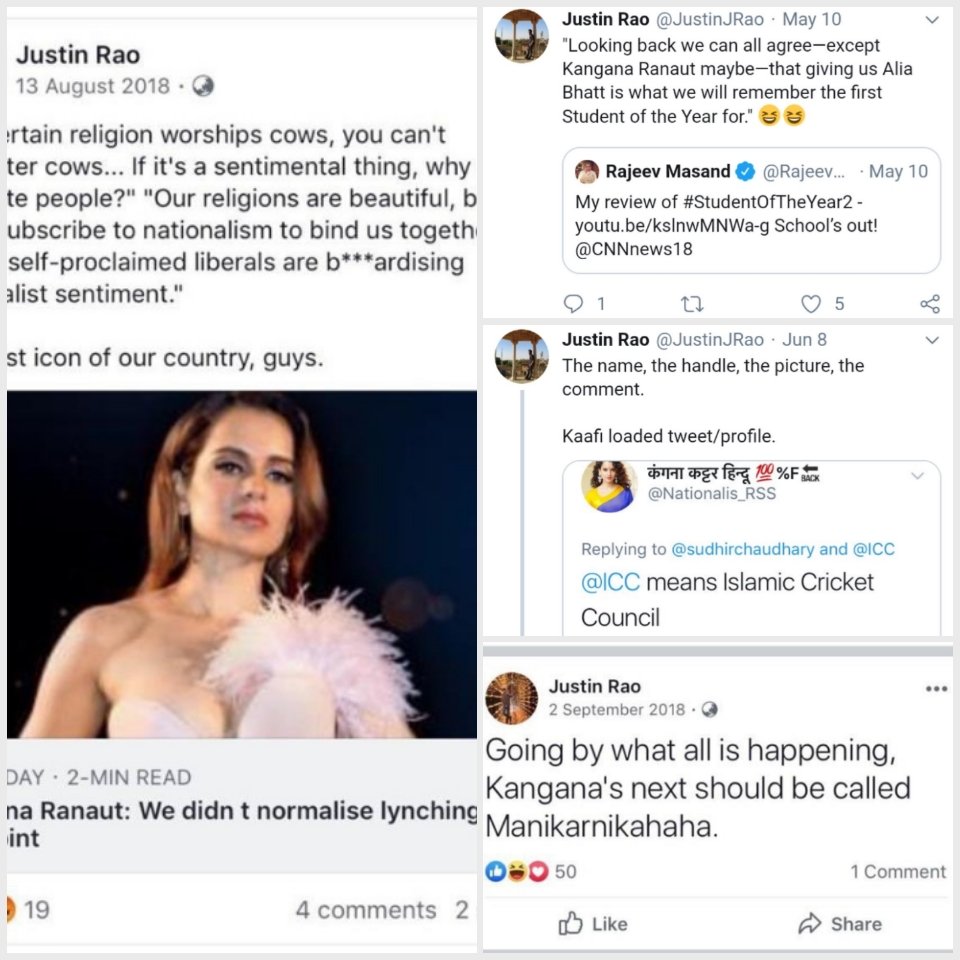 The journalist in question (as seen in the screenshots above) has resorted to riffing on Kangana Ranaut, but for the actor to take it as a assault to the nation’s integrity is a bit too far, isn’t it? Ranaut not only takes offence to these fleeting ‘two-cents’ of this ‘petty reporter’ (according to Ranaut), but also terms him an anti-national for it. If there is any logic behind this action, it is invisible. Ranaut doesn’t even stop there, but goes on to encourage those who made a hashtag about her film, a nation-wide trend and took it past Rs 120 crore. Kangana Ranaut just endorsed trolls.

The thing is Ms Ranaut, there could have been better ways of dealing with a film journalist who you think is being unjustly harsh towards you. A personal message can be an option. Maybe even a Facebook post. We were willing to make excuses for your public showdown with the journalist too. But to say he is anti-national to make fun of your film, is a little irrational.