Being a celebrity comes with its own perks and demerits. And when it is about film industry celebs, the level of vulnerability is enormously high. What happened with singer Neha Kakkar recently proves the level of apathy and scrutiny the industry celebs are often subjected to.

As revealed by herself on a Facebook post, Neha was deceived to perform at a wedding of late where she had to go through an insensitive incident. As mentioned in the post, the ‘Manali Trance’ singer was forced to perform on stage despite being unwell. Here’s what she writes:

Such a Sad thing.. When you’re a Celebrity people Don’t take you as a Human being, for them you’re just a Puppet.. Was performing for a Wedding today though we always say No to Wedding Day Gigs, We do Pre Weddings.. So today the event company fooled us by saying it’s a Pre Wedding Gig when I landed they told us it’s the Wedding Day only.. So anyway I had to perform since we had already promised.. After being Unwell I performed for 60 mins and gave my 100% after 60 mins I coudnt perform more and came down, told the organiser that I’m not feeling well I’ve to leave, they said You Cannot Move from here until you Perform More.. I told those people I’m sorry I won’t be able to perform more, I’m not in a condition to perform but they all Kept on Clicking Pics with Me even after knowing the fact that I’m not well and I had to go on stage again and then I broke down on stage itself.. Coudnt control my tears.. Regretted being a celebrity for a sec. today….. I know whatever I am today it’s because of You guys.. But don’t I deserve a break when I’m not well?

She also posted a video from the event later.

Neha, who is popular for her hit tracks like ‘Maahi Ve’, ‘Sunny Sunny’, ‘Aao Raja’ and ‘Second Hand Jawaani’ among others also took a moment to thank her fans. In fact, she received a lot of supportive messages from her industry colleagues. 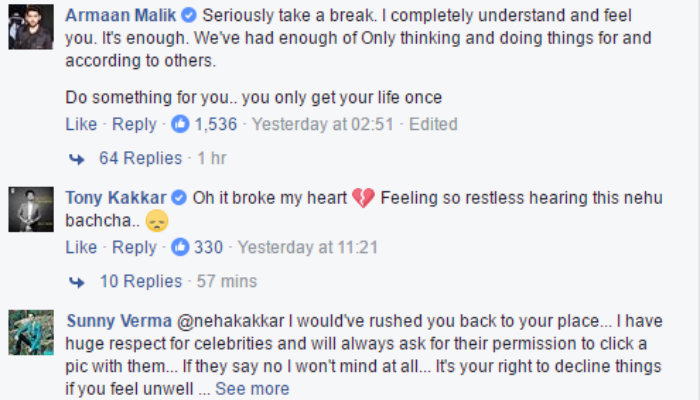 More power to her!