Sonchiriya is a film about haunted spirits and remorseful bandits. The title, derived from the nostalgia for our ‘once-upon-a-time prosperity’ as a nation, serves as the perfect elusive plot-device in a film where most characters are looking for an escape. The unforgiving landscape of the Chambal ravines have been the setting of violent tales of revenge. But in Sonchiriya, director Chaubey uses the skeleton of a bandit film to ask more ruminative questions.

What happens to these idealistic baaghis (rebels) when they begin to question the futility of their honour-code? What does a bandit do when they come to terms with the bottomless pit of revenge?

A line often repeated in the film directly references the circle of violence – “the snake eats the rat, and then the snake gets eaten by the vulture, that’s the law of nature” (even lending itself to a sensational requiem composed by Vishal Bhardwaj).

One of the most ambitious Hindi films we’ve seen in a long time (barring Tumbbad), Chaubey’s film confidently goes around doffing its hats to some iconic films. Whether it is a cop’s (Ashutosh Rana) slain family, that sets him off like a hound after daakus (a la Sholay), or the bit from Roman Polanski’s Chinatown towards the end, Sonchiriya does it with panache. The film is as much an action film featuring more than one Mexican stand-off, as much a social drama that scrutinises gender roles and caste bias in the area. It also manages to mine humour in the most unlikely places, like when a group of bandits suddenly come face-to-face with a troupe of police personnel, catching both parties off guard.

Sonchiriya boasts of an outstanding ensemble of actors, who disappear into their characters. When the lights dim, there’s a good chance that you stop thinking about the names of Sushant Singh Rajput, Bhumi Pednekar, Manoj Bajpayee, Ranvir Shorey and Ashutosh Rana.

You’ll empathise with Lakhna Singh’s (Rajput) shaken faith in his ‘purpose’ after he loses a loved one, you’ll admire Indumati Tomar’s (Pednekar) true grit for doing the right thing in spite of having gone through unspeakable trauma. You’ll see the betrayal in Vakil Singh’s (Shorey) eyes after he finds out about Mansingh’s (Bajpayee) twisted scheme to absolve himself of his sins. You’ll fear Virender Singh Gujjar’s icy stares, only to find out the pain behind it, much later. 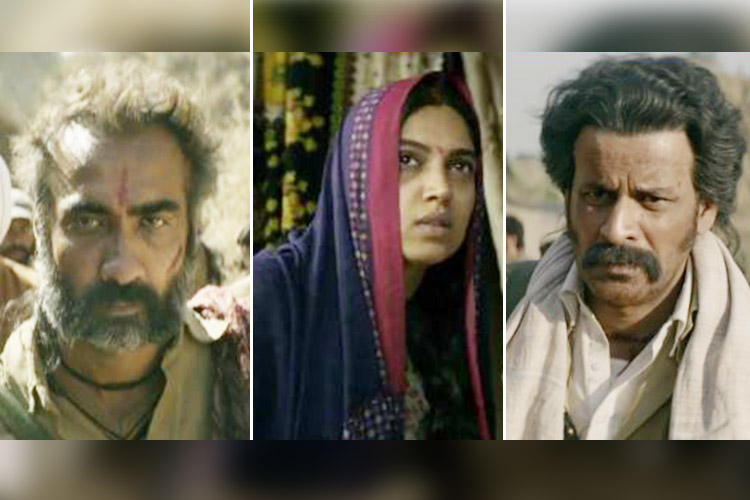 Jatin Sarna (Bunty from Sacred Games) appears in a restrained cameo requiring him to play an emasculated character, in a film where testosterone brims restlessly in most scenes. In a land marred with such social injustice through and through, the characters of Sonchiriya devise their own right and wrong.

Most of the times, the choice only exists between the terrible and the downright repulsive. In a chilling scene, a female character laughs off a woman’s claim of belonging to the Thakur community. “You still haven’t understood, have you? Caste, communities are for the men… women are below all of that!”

In a place where magazines are emptied and blood is shed over the tiniest assaults on (mostly male) ‘honour & pride’, it’s refreshing to see such haunted characters coming to terms with the consequence of all the mindless violence. Abhishek Chaubey’s Sonchiriya could very well be called a postmortem of the bandit film. After all, only corpses and free spirits remain by the end of this one.