The air outside Lucknow airport is tense, and a middle-aged man with a grey beard and glasses (hammering the point of a ‘journalist’) is talking to the camera about the Ayodhya verdict. There’s a huge crowd gathered outside the airport in anticipation and that’s when someone blurts out, “Is someone important coming? Is it Amitabh Bachchan?” At this exact moment in Abhijit Panse’s Thackeray, the makers give away how they look at their title character. It’s a throwaway line in a film that has significantly bigger problems, but it is this perception that lies at the very core of this dull and corrupt biopic. They’re in awe of their subject!

Looking at the top-shots of a vehicle convoy piercing through a crowd and close-ups of the late politician’s hands wrapped with a string of prayer beads, one sincerely cannot understand if they’re trying to recreate the best portions of Ram Gopal Varma’s Sarkar. A film where Amitabh Bachchan play a part closely modelled on Bal Thackeray. At this point, you wonder if the filmmakers have an Amitabh Bachchan complex. 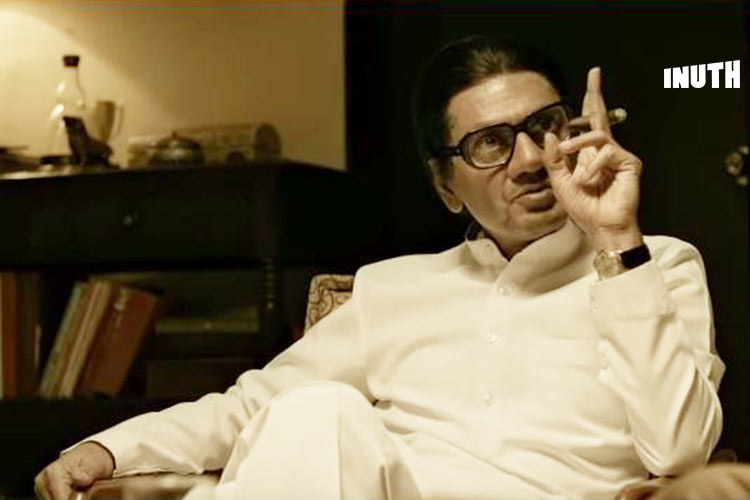 Thackeray is incredibly callous in the way it goes about endorsing the violence and the arm-twisting methods of Shiv Sena and its leader. How it casually interprets the party’s rioting ways as a fight for the rights of the ‘son of the soil’. It’s also shockingly exploitative in the way it gawks at the Sena supporters being lathi-charged by the police with a sympathetic score playing in the background. Even though it is the Sena workers who initiate violence in the name of a ‘demonstration’.

For his part, Nawazuddin Siddiqui immerses himself into the character, getting real close to the charisma of his real-life counterpart. Armed with a pointed prosthetic nose and fat glasses, Siddiqui alone fills the room. However, just like Vicky Kaushal in Uri, Siddiqui’s acidic rants aren’t a means to a larger conversation. They are there only because that’s what the audience expects from the film – electric and divisive speeches.

It is pointless to even talk about the craft of Abhijit Panse’s film (or the lack of it). How do you discuss a film that shamelessly propagates its subject’s polarising political ideology without even pretending to dissect it. The film goes on to showcase Bal Thackeray’s Islamophobia and how that impacted his role in the ’92 riots. It doesn’t care about how Thackeray goes from being a disillusioned illustrator to a gun-wielding politician, in a matter of two chapters (yes, the screenplay is lazily divided into chapters).

Panse, however, conveniently showcases a Mumbai seen through the eyes of Bal Thackeray where only Gujaratis, Muslims, ‘Madrasis’ exist. Through a series of illustrations, Panse shows us Thackeray’s xenophobia where the ‘outsiders’ are even breathing into the Marathi manoos‘s share of air in the city. Does this xenophobia come from a personal place, was it merely a political ploy? Was it a bit of both? The makers couldn’t care less.

Calling Abhijit Panse’s film one of the most politically incorrect biopics of all time, wouldn’t be far from the truth. It reiterates Thackeray’s fondness for Hitler and even mentions his own dictatorial ambitions in passing. It shows his blatant hypocrisy, when he criticises the 1975 emergency for cracking down on his printing press. He later meets with Indira Gandhi and endorses the emergency, when it threatens the very being of Shiv Sena.

It shows him going on tirades about Hindutva, but never cares to address it. Especially in the current political climate. There’s also a shocking, tone-deaf scene where Thackeray defends his henchman in front of a doctor. He says that even though they both wield ‘knives’ for a living, while the doctor does it to fill his deep pockets, the other guy does it to find his rightful place in society.

It’s too early to call this, but there is a good chance that we won’t see a nastier film than Abhijit Panse’s Thackeray in 2019. One that actually doesn’t actually care about understanding its lead character and his convictions, and only wishes to lionise him.