Girls, if all your Tinder left swipes were condensed into one single person, Yogi (Irrfan Khan) from Qarib Qarib Singlle would be that monster. He wears tracksuits to a date, he snatches your phone away and starts texting people on your behalf and boy does he love mansplaining. He reminds you he is sitting on wads of notes every few minutes and waves off the idea of going dutch like a “cute feminist concept”. But because Yogi is played by Irrfan Khan, he charms the maheshwari dupattas out of the leading lady, Jaya (Parvathy). Jaya is a medical professional in her mid-30s, who wears her single-status like those embarrassing swipe cards that you need to wear to gain access to your own office. She uses to ward it off unwanted attention but is probably fed up of being told that she is lonely and needs a partner.

Yogi, on the other hand, is a spirit cousin of one of Irrfan’s most-loved roles, Monty from Life… In A Metro (2007). He is awkward, socially-inept and peddles Wikiquotes as wisdom. He reeks of new money and is obviously smitten with this woman who walks around enveloped in a Body Shop cloud. If he is aware of her being way beyond his league, like a true businessman, he ensures that he doesn’t show it. Instead, he bullies his way into her heart.

He somehow manages to hoodwink her into taking a cross-country trip with him and before you know it, we have cutesy sequences of both these likeable actors dozing off in each other’s shoulders. Each destination is structured to be a progressing chapter in their love story before it tapers to a predictable climax. 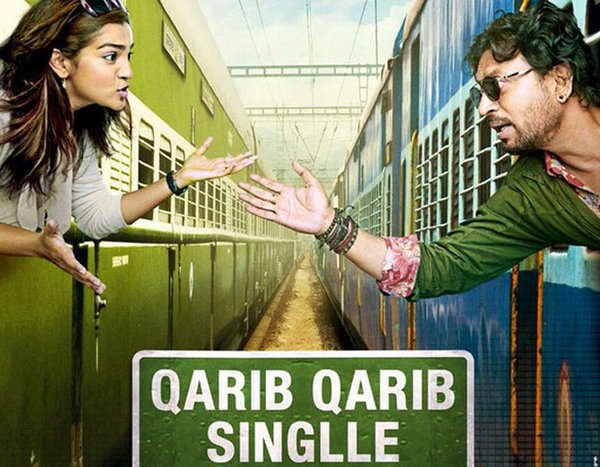 Director Tanuja Chandra ensures that we are aware of the fact that she is making a film about the perils of modern dating, the rituals attached to it, the silly games that people play. Chandra, who has the uncanny ability of understanding the emotional core of original Hollywood films she adapts and yet faltering spectacularly in execution, like in Dushman (adapted from Eye for an Eye) and Sangharsh (adapted from Silence of the Lambs), relieves herself from the burden of being profound in this one. Which is why, large portions of the film flows like an autumnal love song.

Irrfan and Parvathy play this potentially sleepy material with spry, generous adroitness, genuinely listening and subtly playing off each other’s reactions and body language. This is hardly the most testing work of their careers (Parvathy is a celebrated actor of Malayalam cinema) and they know the tricks of the game. There are moments where both these actors, especially Parvathy, precisely exude the true, worn-and-torn spirit of a life lived alone. She layers her performance with an undercurrent of exasperation, a strange, quiet I-can’t-take-this-shit-anymore-ness that makes even the most contrived sequences believable.

Yet, even when Qarib Qarib Singlle doesn’t require its stellar lead cast to dig deep, their enjoyment of each other’s onscreen company is warmly palpable, and thus infectious. We want these two to end up with each other. Isn’t that the mark of a successful love story?