Early on in Ritesh Batra’s Photograph, we hear Nawazuddin Siddiqui’s Rafi make a convincing sales pitch in front of one of Mumbai’s iconic landmark, Gateway of India. A photographer-for-hire, Rafi says to his potential customers, “years later when you look at these pictures, you’ll feel the sunlight on your face, the wind in your hair. You’ll be able to hear the cacophony of this place…” It’s clearly something even director Ritesh Batra aspires for, with a one-of-a-kind assurance. Whether it is using a coaching class billboard as an element in the story, or lovingly photographing the ancient elevators and wooden staircases inside those crumbling buildings with Parsi residents, the specificity of Batra’s vision helps his audience ‘live’ in the same world as his film’s characters.

If capturing the artistic flourishes in our mundane routine is an art, Ritesh Batra is slowly emerging as its undisputed champion in the Hindi film space.

Photograph is completely at ease in its stillness. In a city as extroverted as Mumbai city, Batra discovers his love story between two introverts, Rafi and Miloni (Sanya Malhotra). He’s another immigrant in the city, who has made his peace with the fact that he will spend his entire life repaying his life’s debts, and therefore never  be able to provide for a family. She’s a CA Foundation topper, raised within the confines of an overprotective Gujarati family. They meet, he asks if she wants her picture, she agrees. A meet-cute literally for the photo-albums.

When he shows her the picture, she can’t recognise herself at first. So impressed is she by Rafi’s camera-work (rather his eye) that she agrees to pretend to be Rafi’s love interest in front of his grandmother (a wonderful Farrukh Jafar).

Ritesh Batra’s Photograph is a classic fairy tale, with one foot out of the door. As both Rafi and Miloni invent anecdotes to sell their love story to his grandmother, they routinely look at each other as if to ask if there’s any truth to them. As they get more and more comfortable playing pretend in front of Rafi’s grandmother, they keep questioning themselves if they’re *actually* falling in love with each other. Their dynamic is equal parts make-believe and disbelief. At one point when Miloni describes how she lost her family, it’s impossible not to chuckle.

Their stories are so preposterous, it feels like the work of a lazy screenwriter. And yet, in their world, it is real. Does that mean their love is real too? 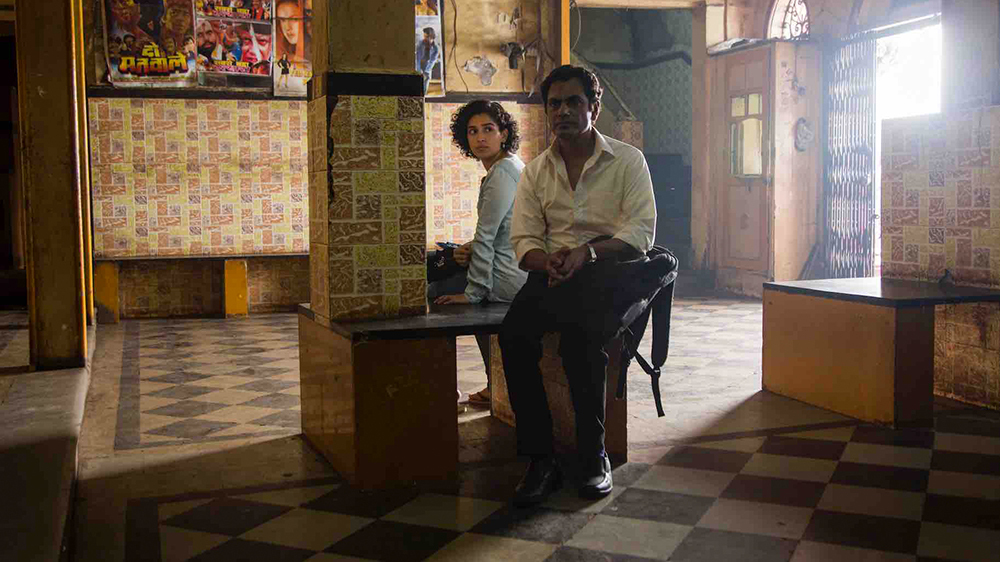 Batra goes meta in a scene when a cab driver asks Rafi if the ‘pretend couple’ are actors. It’s probably a Bollywood gimmick to put together a ‘quirky pair’ like Nawazuddin Siddiqui and Sanya Malhotra. He needs to convince his grandmother that he’s found someone who will take care of him, while Sanya’s just looking for a break from her claustrophobic suburban existence. It is a transactional relationship like so many others in the city of Mumbai. It can end the day his grandmother leaves. After all, both know this love story is not meant to be.

Apart from the class barrier (a go-to trope for so many melodramatic Hindi love stories), she knows she will never have the permission to fall in love with a man of her choice. She might romanticise the idea of living in a village and working in a farm, but that could just be a 19-year-old’s impulse. She will never be able to accurately describe how she feels more comfortable with this stranger in a cab, than around her pushy teacher (played by Jim Sarbh). Nawaz, on the other hand, realises that he will never be able to give her the life she is used to. Something which will automatically replace the romance with resentment. It’s just not meant to be.

Just like a photograph promises to capture moment in our lives, this love story will become a snapshot in theirs. They will relive it in their memories. And in these memories, both Rafi and Miloni will feel the sunlight on their face, the wind in their hair, the cacophony around them, and that feeling of real love.