Had the makers of Mardaani 2 just credited WhatsApp forwards for screenplay inputs, it would have made for a great primer for the film. Instead, we’re made to sit through almost two hours of voyeurism, the film’s hollow rhetoric and its cool-on-paper-unintelligible-in-real-life dialogues, just so that Rani Mukerji’s super cop, SP Shivani Shivaji Roy can walk in slow-mo.

The film begins with a kidnapping underway, and right off the bat, the first person the audience is introduced to, is Sunny (Vishal Jethwa). Sunny looks young-ish, but is it established that he is a juvenile sex offender like the film’s posters and the data in its opening sequence tells us? The film ends before the director, Gopi Puthran, could answer this query.

What the director repeatedly does, instead, is establish how twisted, devious, and cunning Sunny is. So much so that he, this supposedly juvenile rapist, outsmarts the entire police force over and over again, before they, nay, Shivani, catches him. Wonder who this is a commentary on? Criminals, or our police force. 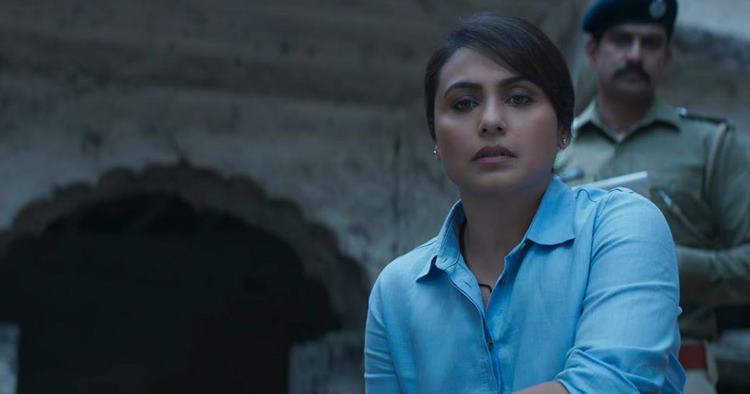 The film’s entire plot centres around catching a rapist-killer who outwits everyone, and plays the police officers against each other. Sadly, Rani Mukerji’s gum-grinding super cop routine never quite comes across as believable. Her empathy for the victims is never as convincing as the filmmakers think it is, and her Sherlockian deduction skills never as clever as they hoped it would be.

On the other hand, and perhaps more disturbingly, the only person who makes a connection with the audience, by literally breaking the wall incessantly, is Sunny. If Puthran’s sole objective in making the film was to creep the audience out, he achieved it by subjecting us to several one-on-one monologues from the serial rapist as he gleefully talks about the ‘reasoning’ behind his crimes. The film does not come with a trigger warning, so please treat this review as one.

There are several shots of the rape victims mutilated bodies. The camera pans into their broken faces, their faces gouged, thrown into a nala, or hung from the wall. If these gruesome images conjured for the benefit of encounter-apologists wasn’t enough, the camera then pans to the faces of the women cops/doctors whose tears are meant to drive home the monstrosity of the crime. Because unless a woman is mangled beyond recognition, and the details are revolting ‘enough’, when it’s ‘just a rape with a survivor’ instead of a severed dead body, how will we muster enough outrage, right?

“Women are born with pain built in,” the protagonist is told in the second season of Phoebe Waller Bridge’s critically acclaimed show, Fleabag. What remains untold, but is just as true an observation, is the other thing women live with. Fear.

Through bedtime stories of ‘wayward’ girls, through whispered cautionary hints on how to avoid the touch of ‘certain relatives’, through oft-repeated tactics on how to side-step unwanted touch in public places, young girls are taught to fear. No matter what the tagline a film’s production company slaps onto the posters, it is this crippling fear, as well as the drawing room/social media conversations of revenge and vigilantism, that’s the driving force behind a majority of recent cop slash vigilante films. And Mardaani 2, despite all its gender bending pretenses, is barely any different.