Ranjit Tiwari’s Lucknow Central is an endearing tale of a man who never gives up on his dreams even when circumstances are at their worst. Inspired by true incidents, the Farhan Akhtar-starrer also underscores system’s lack of empathy towards prisoners and the despicable state of jails in our country. Powered by a solid script and a dependable cast, Lucknow Central subtly delves into nitty-gritty of life behind bars and depicts the devastating toll it takes on the life of prisoners.

The film traces the life of Kishan Mohan Girhotra (Farhan Akhtar), a young man from Moradabad who wants to make it big in the world of music. To pursue his dreams, he records his songs in a demo CD and unsuccessfully tries to give it to a Bhojpuri superstar (Manoj Tiwari). A day later cops barge into his home and arrest him on charges of murdering an IAS officer. Soon, Kishan gets convicted in the case and faces death penalty. Around same time, Minister Pawan Singh Chaturvedi (brilliantly played by Ravi Kishan) orders Prison IG to organise a state inter-jail music competition. During this time in jail, Kishan comes across Gayatri Kashyap (Diana Penty), an NGO activist working to reform prisoners. The jailer is played to perfection by Ronit Roy, a hard-hearted man who does not believe that criminals can be reformed. What follows is the story of Kishan’s friendship with four other prisoners played by Deepak Dobriyal, Rajesh Sharma, Inaamulhaq and Gippy Grewal – who all have some unique talent that will help them in the prison break.  Will Kishan turn this into an opportunity to start a music band or will he try to escape prison?

Also read: I want to be a part of intriguing stories: Diana Penty on Lucknow Central, Parmanu and more

Debutant director Ranjit Tiwari makes the film engaging right from the beginning. His story also strikes a philosophical cord, as it asks a pertinent question – what is redemption all about? Through this film, Tiwari also touches upon the issue of social alienation of prisoners even if they are out of jail.

The climax was little sloppy as it seemed that the director was in a rush to end the film. However, Lucknow central’s strengths far outnumber its weaknesses.

Given that this film is based on a music band formed by alleged criminals,  Lucknow Central has some decent compositions. Rangdaari crooned by Arijit Singh sums up the tale of  people who believe in their dreams, Teen Kabootar and the foot tapping Kawaan Kawaan were also thoroughly enjoyable. As for the background score, it was engaging and fully completed the  onscreen drama.

Also read: Lucknow Central and 7 other times Bollywood effectively introduced the city of Lucknow in its plot

Lucknow Central has a gripping screenplay barring a few dull moments in the beginning. The deftly written scenes, one after another, will keep you absorbed in the unfolding drama. Akhtar’s inspiring lines  — ‘Bande Qaid kiye ja sakte hain sapne nahin’ or ‘Seher Chotte Hote hain Sapne nahin’  even in darkest moments of films also makes Lucknow Central a winner.

Kudos to Tushar Kanti Ray, for his beautiful camerawork. From capturing dark corners and crevices of  prison cells to arresting the despair in the eyes of its inmates, Ray has done a commendable job with lenses. 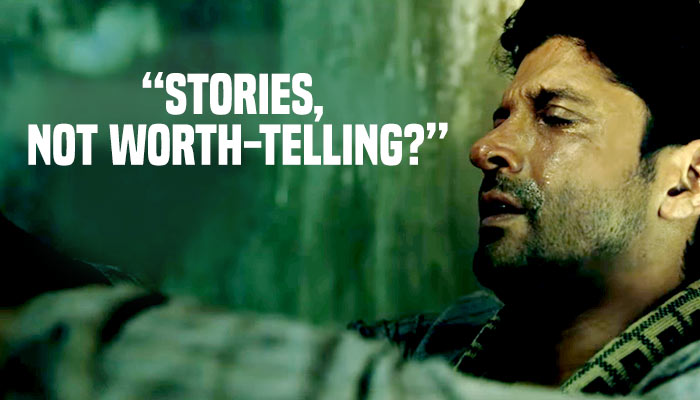 Farhan needs to be lauded for believing in this script. While his portrayal of a hinterland hero may not be convincing enough, he has still done justice to his character. His efforts to mispronounce English words looked little artificial ( Maai dum for madam, Corat for court, rohk for Rock and naan-existent for non-existent). However, his mannerisms and innocence gelled well with his character. Diana Penty playing the role of a prison inmate reformer was not quite as natural.  Her expressions especially during her confrontation with Ronit Roy were pretty bland – almost like a grumpy kid trying hard to stare into the eyes of devil. She is satisfactory at best.

Ronit Roy’s act of a menacing cop is again engrossing, although there is now a sense of deja vu in his roles thanks to a slew of negative characters. The hangover of Udaan looms large in most of his performances – that perpetual frown on this forehead definitely needs some relaxation.

While all the four band recruits were pitch perfect in their roles, a special mention for Deepak Dobriyal, who never ceases to amaze us with his effortless acting.

Last but not the least, Ravi Kishan walks away with some of the funniest scenes in the movie. He will definitely draw a hoot or two from the audience for his portrayal of a minister with a whacky sense of humour.

Also read: No one wants to make a film that won’t work at the Box Office: Farhan Akhtar on Lucknow Central, Don 3 and film making

Lucknow Central is replete with cinematic moments that will fill you up with joy, despair, anger and hope. So, you can watch this film for its sold storytelling, brilliant performances and its message that true redemption lies in pursuing one’s dream.