As far as metaphors go, ‘wind’ has been given enough prominence in our cinema and music to please even Captain Planet. From soothing a lover’s unrequited love to doubling as a description of the protagonist’s carefree persona – ‘hawa’ is and always has been a powerful trope in Hindi cinema.

But this is perhaps the first time it has been portrayed as a ‘character’ in a film. Starring Sanjay Mishra, Ranvir Shorey, Tilotama Shome in pivotal roles, Kadvi Hawa talks about the wrath of wind in a way which leaves you gasping for breath.

A vital commentary on climate change, Kadvi Hawa also takes on the father-son relationship – one that lacks conversations, but where actions speak louder. From quietly following his son to work to even signing a deal with the devil, the father in this film does a Dr. Faustus, but not for personal glory but to ensure his son’s mental well-being. 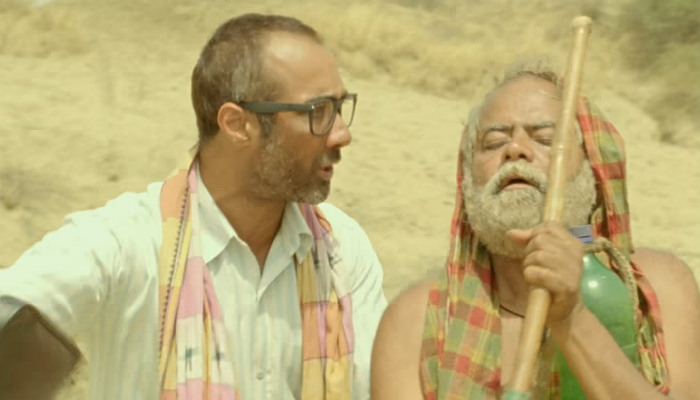 Set in a small village, the hero of Kadvi Hawa is Sanjay Mishra. He plays the blind Hedu, using his stick to find paths in rocky terrains. The initial frames of the movie establish the sorry state of the village- it has more mustard than greens, meaning the hawa has not been considerate in the region for quite some time now. Wearing tattered clothes and dripping in sweat, Hedu wants to know the amount of debt on his son. In this quest of his, he meets the recovery agent Gunu Babu (Ranveer Shorey), infamous for his ways of extracting money from poor farmers. His reputation precedes him, earning him the title of an agent of death. But Hedu manages to form an unlikely friendship with Gunu Babu, who comes to this part of rural India from Odisha in hope of double incentives and a dream to give his family a safe haven.

Kadvi Hawa shows what being poor and without means actually looks like in the most brutal way. It makes you uncomfortable and unapologetically forces you to face the dark reality behind farmers’ daily struggle just to exist. Director Nila Madhab Panda relies on conversations among kids to establish the impact of global warming. In one scene, a school student tells the teacher he knows of only two seasons- winter and summer since rains come only for a day or two.

The cast and performances are on-point. Sanjay Mishra gets the accent right, he is not holier than thou and doesn’t mind crossing over to the dark side to protect his son. You root for him and he wins you over with his love for his son. Ranveer Shorey doesn’t disappoint either. From being the closest to an antagonist to showing us his vulnerability, Ranveer does it all. It’s hard to miss the inimitable Tilotama Shome who acts as a bridge between her husband Mukund and father-in-law Hedu, though she doesn’t get a considerable amount of screen time. 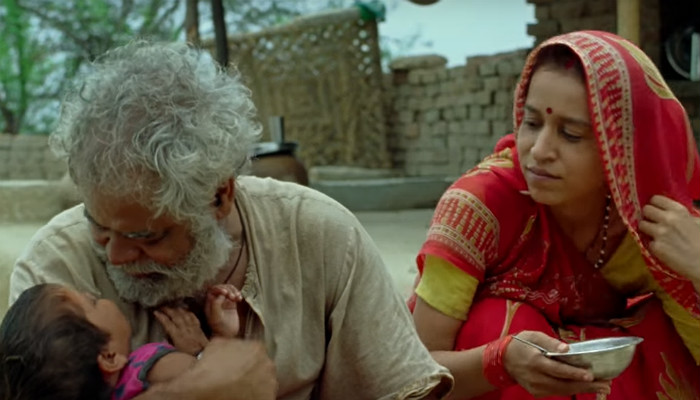 Kadvi Hawa will leave you with a bitter aftertaste. But not one of distaste – but one that forces you to think about the planet we live and how it’s slipping away from our hands.