What will you do if you find yourself in an unfavourable situation with the entire world up against you? You choose to fight instead of chickening out. Hrithik Roshan as Rohan Bhatnagar in Kaabil is no different. In this vengeful drama, you will be compelled to salute him for taking on the baddies who dared to destroy his world of happiness. Despite having endured two unsuccessful outings at the box office, Hrithik chose to take the risk again. And this gamble has paid off.

Directed by Sanjay Gupta, the Rakesh Roshan’s production revolves around Rohan Bhatnagar, who is blind but enjoys his life without letting his disability to get the better of his calibre. He goes on a blind date with Supriya (Yami Gautam), who interestingly cannot see as well. The duo fall in love and end up marrying each other. However, fate has something cruel in store for them. Rohan is pitted against local politician Madhavrao Shellar (Ronit Roy) and his younger brother Amit Shellar (Rohit Roy). What follows next is an intriguing tale of vengeance.

For someone like Hrithik Roshan who is known for living up to challenging roles, Kaabil is akin to hitting the bull’s eye. He plays the role of Rohan Bhatnagar with sheer perfection, a soothing experience for his fans. On the other hand, Ronit Roy stands out with his brilliant portrayal as the villain and his sibling Rohit Roy does not disappoint either. Narendra Jha is amazing as a senior police officer in this film. This film was no less risky for director Sanjay Gupta whose last outing Jazbaa was a forgettable experience at the box office.  However, Urvashi Rautela’s sensuous Saara Zamaana performance is an icing on the cake. 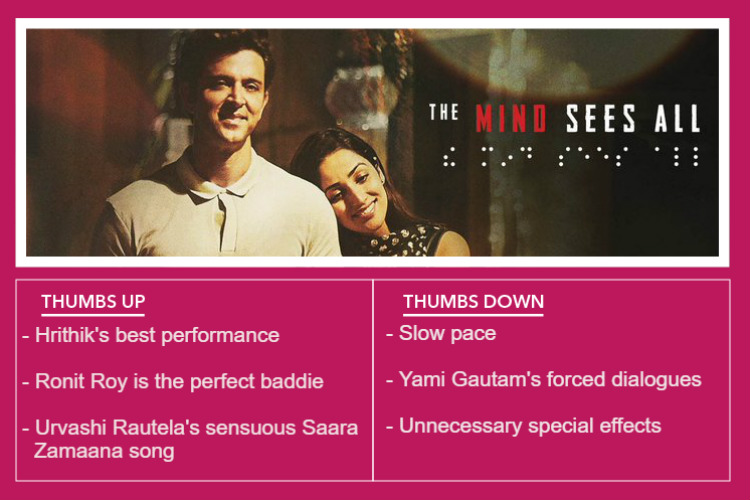 However, the film has its shortcomings too. It is slow in the beginning, which does not go well with a thriller flick. Besides this, there are too many VFX effects in the flick, which could have been managed well. Yami Gautam too appeared artificial in terms of dialogues in the latter half of the film. Nevertheless, the climax of the film is worth watching.

Do watch the film if you want to experience an adrenaline rush.