Singer Monali Thakur is currently being hailed as the mascot of feminism for her ‘epic’ reply to a person apparently, slut-shaming her for wearing ‘short dresses’ on her reality TV show Rising Star. She is the top trend on all social media platforms. Reams of webpages have been devoted to praising Thakur’s reply to a fan, who wrote an Instagram message to the singer pointing out how her dresses made him/her uncomfortable. (We are not sure about the gender of the Instagram user). Now, slut-shaming is something that no girl must put up with and should at all cost condemn in the harshest of words possible. However, before we make a judgement on the whole case,  let’s just take a look at what Monali’s fan’s message read like: 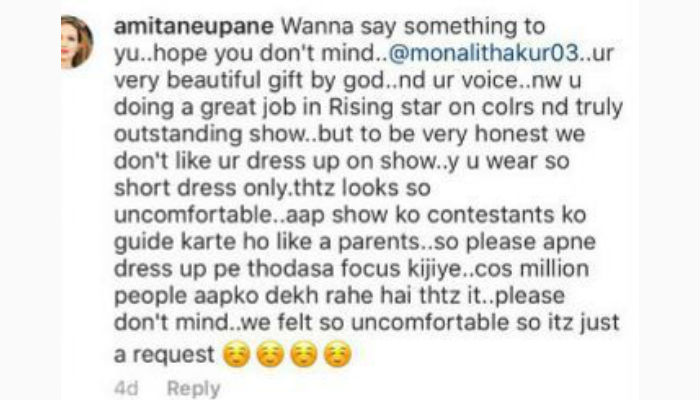 Let’s write this in legible English for you sans the short forms of social media.

“Want to tell you something. Hope you don’t mind. Monali Thakur you are a very beautiful gift by God and your voice too. Now you are doing a great job in Rising Star on Colors and it’s a truly outstanding show. But to be very honest, we don’t like your dress on the show. Why do you wear only short dresses? That looks so uncomfortable. You are like a mentor to the participants in the show. So, please pay more attention to what you wear. Please don’t mind. We felt so uncomfortable. So, it’s just a request. “

Definitely, the message was narrow-minded and full of wrong perceptions. But it’s tone was that of a request coming from a person who definitely loves and appreciates her work. Another thing to be noted is we don’t know whether the person making the comment was a girl or a boy.

Now, read how Monali Thakur reacted to this. 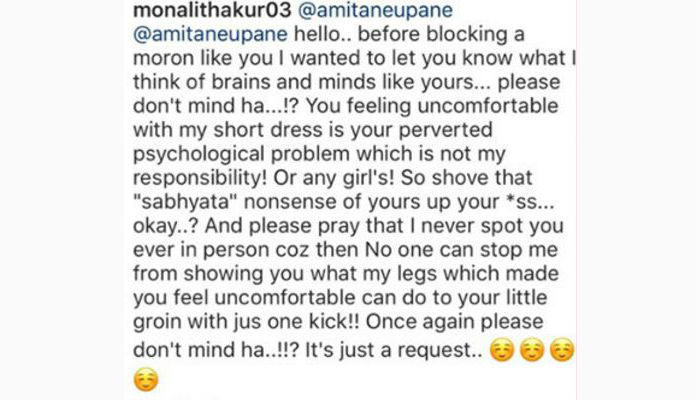 Here’s the text of her response:

“Hello, before blocking a moron like you, I wanted to let you know what I think of brains and minds like yours. Please don’t mind. You feeling uncomfortable with my short dress is your perverted psychological problem which is not my responsibility! Or any girl’s! So shove that “sabhyata” nonsense of yours up your *ass…okay? And pray I never spot in person coz then no one can stop me from showing you what my legs which made you feel uncomfortable can do to your little groin with just one kick. “

People are hailing this response as an ‘epic reply’ and lavishing praises on her for giving a courageous, bold and a befitting response to someone who tried to slut-shame her. But we feel differently about this. And there are a number of problems with her response.

The first problem with the post is that Monali has done nothing to be hailed or celebrated as a feminist. If anything, she has given a bad name to feminism. Without even ascertaining whether the person talking to her was a man or a woman, she uses really crass words like: “hit your groin” and “shove your Sabhyata up your a**.” Considering, even if he was a guy, does she have the right to publicly endorse violence against someone who hasn’t threatened violence?

Honestly, how many of you reading this article haven’t been cautioned by their mothers or buas or chachi or taayi about not wearing that tight short dress to the party? Just how many of you sneaked out in regular clothes and changed outside your house to satisfy your urge to follow the latest trends? Tell me, how many of you as teenagers took off that jacket worn over your sleeveless dress once you were safely outside the confines of your locality? Did we all threaten our relatives and neighbours with dire consequences for scrutinising out the length of our dress? With time we grew braver and more confident to wear what we want to in front of our parents.  And that’s about it. Once we accept ourselves and are comfortable in our skin, nobody’s opinion really matters. We stop caring and start ignoring unwarranted comments on our dressing choices. And that’s where independence lies. To live by our rules while not giving a shit about what others say.

Secondly, a true feminist will never abuse someone. They would always ask critical questions. When there was no apparent threat of violence or any use of abusive language, she should have asked herself why does the person concerned speak in a way he/she did. The answer would be conditioning. The boy or girl might have grown up watching women covered up. For them, that is the right way of dressing. No feminist will ever say, “you feeling uncomfortable with my short dress is your perverted psychology. It is not my responsibility.” A feminist will always take upon herself the responsibility to go to the depths of her critic’s mind. Did her critic have the same upbringing, same exposure to the world and same economic background as her’s? What is normal for him or her? Is his/her judgement of her dress coming from his/her alleged perversion or his conditioning?

Monali’s response reeks of elitism. The same elitism that makes rapists out of all migrant workers and labourers, rickshaw pullers and cab drivers.  Her endorsement of violence in her post is very problematic. It reflects the lynch mob mentality, an eye for an eye mentality that doesn’t make this world a more gender sensitive place.

And finally, a feminist would never block opposing thought processes but try to engage with them through logical means. A feminist would wisely choose her battles. Is it really so important to bad-mouth a rather ignorant yet not ill meaning fan or take on more pressing issues like casting couch and sexual exploitation of women in the industry and the abject objectification of women in the film industry? She must learn this from her fellow singer Sona Mahapatra who exposed the sexist ways of college music festivals.

In an era where every other statement by celebrities is hailed as a win for feminism in India, we need to keep going back to what feminism stands for. So that space is not occupied by every other thought peddled on social media. As for Monali, she definitely needs to learn better ways of articulating herself, if she indeed wants to be seen as a feminist role model.
(Image by Vineeta Kumar)
Trending
photos