In a movie that revolves around filmy masculinity, director Vasan Bala distills the spirit of his film in a passing moment. Twin brothers Karate Mani and Jimmy (Gulshan Devaiah) quarrel over their father’s medallion, and that’s when Jimmy tells his brother to stop moping like a Kamal Haasan fan. “Look at you growing a beard and wallowing in sorrow. Now, only if you were a Rajini fan…” It’s a perfectly-timed joke, riffing on the divide between the ‘sentimental hero’ as against the hero who kicks ass. The former doesn’t always find a girl by the end of the film, while all it takes is a slo-mo Rajini entry to make women swoon over him. Vasan Bala’s Mard Ko Dard Nahi Hota follows nine-year-old Surya, who gets his worldly values through a VCR player and his incredulously ‘hipster’ grandfather (a winsome Mahesh Manjrekar), and how it all changes once he steps out into the real world.

As most of us have already picked up from the trailer, Surya is diagnosed with congenital insensitivity to pain. He doesn’t ‘feel’ like most men in Hindi cinema. He says ‘ouch’ with the practiced monotone of a woman faking an orgasm. As if it’s something he’s been taught to say each time someone tries to ‘test’ his condition. Bala goes around ticking the boxes of Hindi cinema cliches – giving our nine-year-old protagonist a childhood sweetheart (a la Anjali from Jo Jeeta Wohi Sikandar), twin brothers who resent each other because… life, a drunken martial arts instructor who finds redemption through a new protege, and finally a villain who enjoys his villainy too much. Just like Amrish Puri in countless 1980s blockbuster – over the top, difficult to take seriously, and still inducing grudging fear.

Borrowing the title by paraphrasing one of Hindi cinema’s most popular dialogues from the 80s, Bala’s directorial debut is a love letter to the cinema he grew up on. The protagonist mouths titles of 1980s potboilers as dialogues. When he is threatened, he says Paap Ko Jalaa Ke Raakh Kar Dunga (the 1988 Dharmendra-Govinda starrer).  Kamal Haasan-starrer Geraftaar becoming Surya’s war-cry when he turns vigilante, or the climactic action sequence resembling a Stephen Chow film set in Matunga – Bala’s throwbacks come from a place of purity. He doesn’t slot his love for 1980s Bollywood as kitsch or something cool. It’s more visceral and therefore, more convincing. That’s why, when his hero manages to get back on his feet, after being repeatedly knocked down, we buy it. But the most interesting bit is, Bala is also self-aware. The rousing score behind him and the melodrama that precedes it, ensures that audience expectations is flipped around in during key moments. 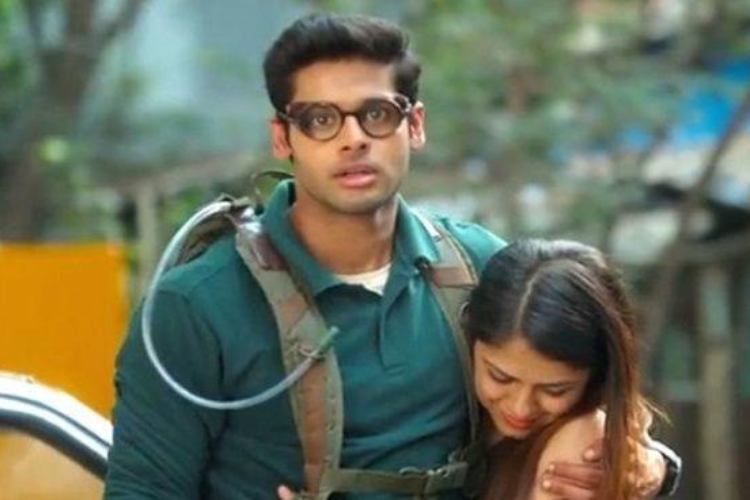 Following the beats of a generic 80s martial arts movie, where one man takes on 20 henchmen, Mard Ko Dard Nahi Hota is consistently watchable. Members of the audience who will pick up on the deluge of pop culture references will surely find it easier to suspend their disbelief during certain portions of the film. Even otherwise, the film thinks on its feet and comes up with new ways to tell the same old story, with an enthusiasm that we rarely find in Hindi cinema.

Bala amps up the stylishly-shot action scenes with Karan Kulkarni’s terrific score, winding the clocks to Michael Jackson’s immaculately produced songs from the 80s. Even recreating Kishore Kumar’s Nakhrewaali to introduce Radhika Madan in kick-ass fashion, quite literally. Both Abhimanyu Dassani and Madan are serviceable actors, but the acting honours for this film (and probably the year) belongs to Gulshan Devaiah.

Relegated as the ‘edgy’ actor from his Shaitan days, Devaiah jumps at the opportunity of this double role and brings a fantastic ordinariness to these characters that speak a lot louder with their actions. Jimmy’s affliction for red attire and Mani’s karate chops are accompanied with two soft-spoken men, as if neutralising the film’s loud visual language that has the subtlety of a sledgehammer. At one point, when Jimmy’s men scream before getting into a physical altercation, he tells them to calm down because they’re in a residential area. Bala doesn’t waste a second of Devaiah’s deviously simple-looking performances as both Karate Mani and Jimmy.

Where most web platforms are clued into finding ‘relatable content that only 90s kids will get’, Vasan Bala’s Mard Ko Dard Nahi Hota is a fully realised ode to the cinema of our growing up years. It not only looks back with nostalgia, but also redefines the idea of ‘masculinity’ perpetuated by films of that era. The new-age mard couldn’t care less about Sanjay Dutt’s claustrophobic definition of masculinity, time’s surely up on that.