Nearly two decades after Manoj Pahwa became a familiar face on TV as the samosa-friendly Bhatia in Office Office (starring Pankaj Kapur), he’s finally getting his moment in the sun. For most of his career Pahwa has played the boisterous mama (uncle) of the heroine or the rich father of the hero, but now he’s been *rediscovered* by director Anubhav Sinha, in two stellar performances in Mulk and Article 15 respectively.

Playing the role of the father of a terror suspect, Manoj Pahwa is arguably the best thing about Mulk, a film that also features names like Rishi Kapoor, Neena Gupta and an in-form Taapsee Pannu. His character of Bilal, becomes the face of the innocent Muslim persecuted blindly by bigotry. In Article 15, Pahwa shines in the film’s best scene where he tries to maintain a delicate balance between his city-bred senior and the ancient status-quo of the hinterland. Pleading to his senior at one point, Manoj Pahwa’s character called Brahmdutt explodes in front of his subordinate Jatav (played by Kumud Mishra) only a few moments later.

Almost two weeks after the congratulatory text messages haven’t stopped, Manoj Pahwa agreed to sit down for a chat (over the phone) where he reminded us that he’s essayed the role of a cop before Article 15 – in Anubhav Sinha’s Tum Bin and Homi Adajania’s Being Cyrus. We try and find out how his 2.0 version has come about and whether life has changed.

Congratulations on Article 15…
Thank you, thank you. It was a strong script, and when the people involved are motivated towards a single goal, the film turns out better than how we imagined.

Has life changed after Mulk and Article 15?
I have no clue actually, things seem to be the same. I’ve just found this satisfaction and confidence within myself after these two films. How it usually happens in this industry is, you’re associated with a certain kind of persona and then you get typecast. A happy-go-luck man like me only gets characters where I look the part. I was so relieved (about these two films) and the responses that I’ve been getting have been more than encouraging. I even won the Critic’s Choice Award for the Best Supporting Actor, which makes them very satisfying choices.

Let’s talk about your performance in Mulk, arguably the standout supporting act of 2018. Most of us began watching the film for Rishi Kapoor and Taapsee Pannu, but by the end your performance is so hard to shake off. What was the conversation with Anubhav Sinha for this delicate, vulnerable part?
When I read the script and saw that names like Rishi Kapoor and Taapsee Pannu were attached to the film, I asked them if I could play the role of Bilal. I had met people like him – a younger sibling who is forever sentenced to being the ‘young one’ in the family. Everything they do gets overshadowed by the ‘brilliant’ elder sibling. Constantly reminded of their status as the black sheep of the family, these people eventually make their peace with the tag. Such people, it usually happens, try to be useful outside the house. They try to compensate for the lack of respect at home, by trying to earn respect in the mohalla. They refrain from sharing their opinions in front of their elder siblings at home. I could relate to the whole mohalla feeling in Mulk, because I’ve grown up in the Daryaganj-Jama Masjid area in Delhi.

Did you plan these two roles to change audience perception? Or did it just happen?
I didn’t meticulously plan it for sure, I wasn’t even sure my performances will be noticed in these films. And if I’m being honest, there were crew members on Mulk who had their doubts about me. In a film as intense as Mulk, they thought once the audience saw me on screen, they would break into a smile. That’s been my image as an actor, that they would expect something funny after seeing me on screen. Once the director communicates this apprehension to you, anyone will become nervous about being the weak link in the ensemble. When you’re so spent into getting the character right, all this ‘changing the audience perception’ becomes the paraphernalia part of the job. Similarly in Article 15, this was a negative character. The intention is always to mould the performance into something believable, someone who isn’t too far from my sensibility.

What’s this equation with Anubhav Sinha that allows him to see you in a light, no one else can?
I worked on his first TV serial, Shikast. And then Sea Hawks. I played a villain in both the shows. He used to keep telling me, that he always saw me as this ‘menacing personality’ (laughs). After that we became friends, and we often worked together. I played a cop in Sinha sahab‘s first film too, Tum Bin. We’ve been around the same circles for nearly 25-28 years now…

What are your memories of shooting THAT scene in Article 15 with Kumud Mishra?
That was a very crucial scene. I obviously didn’t want to play Brahmdutt like the ‘bad guy’. He works in a police station, where things are as they are. For as long as he’s donned the uniform, things have always been like this, and it doesn’t look like anything will change. He’s been around long enough to know that such cases (the rape and murder of 2 Dalit women) are not to be solved, but to be shut down. Just before this scene, Brahmdutt realises that Ayan (Ayushmann Khurrana) has gotten dangerously close to the case. That’s when he’s forced to say it like it is, he tells his superior santulan mat bigaadiye (please don’t disturb the natural order). As a matter of protocol he can’t raise his voice in front of Ayan, so when he leaves Brahmdutt turns and runs towards Jatav and unleashes hell’s fury on him.

What makes it even more important is how Jatav says something along the lines of “I’ve always stood silently behind you, but what am I supposed to do if he asks me a question? Not answer?” Even Jatav’s character sees some progression in that scene – he’s the kind of guy who has risen from a place where he’s happy with where he is. He quietly co-operates with Brahmdutt through most of his career. But when Ayan comes to the village, he slowly begins to gather some courage to doing his actual job. It’s such a beautiful conflict written by Sinha sahab and Gaurav Solanki.

Another funny thing happened on that day when we were supposed to shoot that scene. Some friends of mine decided to drop by the film around lunch time with mutton keema in a tiffin box. I was nervous about the scene and I knew if I ate to my heart’s content, then we might not be able to get the scene right. So I went into my vanity, had some fruits and a glass of buttermilk and then napped before they started filming. Once we canned the take and everyone was happy with it, is when I finally proceeded towards the keema. 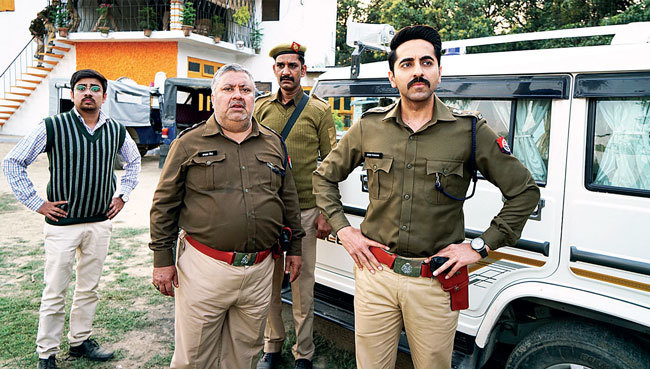 You’ve done roles in ensembles like in Taal, Dil Dhadakne Do and there are characters in Mulk, Article 15. What are things you like and dislike in both these types of assignments?
I don’t think an actor is allowed to have likes or dislikes. There has to be a certain ‘adaptability’ for an actor to function on both kinds of film sets. When I came to Bombay, I had no clue that I would get the opportunity to work in so many ad films. I worked with a bunch of really good directors like Prahlad Kakkar, Piyush Pandey, Mahesh Mathai and Pradeep Sarkar. That was an experience on its own. I remember how Prahlad Kakkar would tell while shooting for an ad film, “this is not your TV serial… you can’t take half an hour”. It’s a 30-second film and you have just one line to nail, but you have to really get it right. That’s one skill. There are films where you meet your fellow actors for readings and build a rapport with them. Then there are the multi-starrers, where you’re supposed to get things right within a short time. You probably have fewer important scenes in the film, but you still have to be on your toes.

I learned something about adaptability from the great Govinda, while working on Do Knot Disturb. (Director) David Dhawan sahab gave me a fair idea of what the scene was. He showed me the dialogues for the scene and then took away the paper from my hand. “Chichi (Govinda) will change everything when he starts enacting the scene…” – he told me. That’s what exactly happened, Govinda went through the script once and threw it away. Then he came to me and said that let’s try and bring a 50s/60s flavour to the scene. Also, they had this fancy chair & table set-up (where the conversation was to take place), to which he said “let’s sit down on the floor of the office and do our lines.” All that lighting done by the DOP and how he had imagined the shot, it all changed just like that. I hadn’t faced a challenge like this since my theatre days, and when I saw someone of the stature of Govinda on his toes, I thought I should always be prepared like this.

The last few years have been termed as the arrival of character actors – with actors like you, Seema (Pahwa) ji, Kumud Mishra. Have things really changed or is it the same old?
Things have definitely changed, and it is accurately reflecting in the business of Article 15. Even 4-5 years ago, this would have been a ‘risky’ film. Look at the whole string of small-town films like Bareilly Ki Barfi, Shubh Mangal Savdhaan or something like Andha Dhun, they’re all finding acceptance among the audiences. I think now, even though there’s a part of the audience that likes the commercial hero, but they’re also looking for some meat in their films. I mean kuch baat toh kaho (say something in your films), I don’t think they want the same old nonsense with six songs in foreign locations. People are reacting to stories, and that’s why such scripts are becoming profitable to commission. You need *actors* for these films, who have been working on the stage for 30-40 years.