Just the other day, Javed Akhtar participated in a podcast where he stated how Hindi film producers were only interested in remaking the same ‘successful’ film. A recent exception to this rule of Hindi film blockbusters, was 2018’s Stree. Using the popular tropes of a small-town setting with a gifted ensemble of actors, the film offered a commentary on intricate gender politics and laughed its way past the 100-crore mark. With Luka Chuppi, producer Dinesh Vijan tries to rehash the same ingredients from his last year’s success, hoping for another miracle. And that’s one of the film’s biggest shortcomings – it tries to be other films without necessarily finding its own skin. 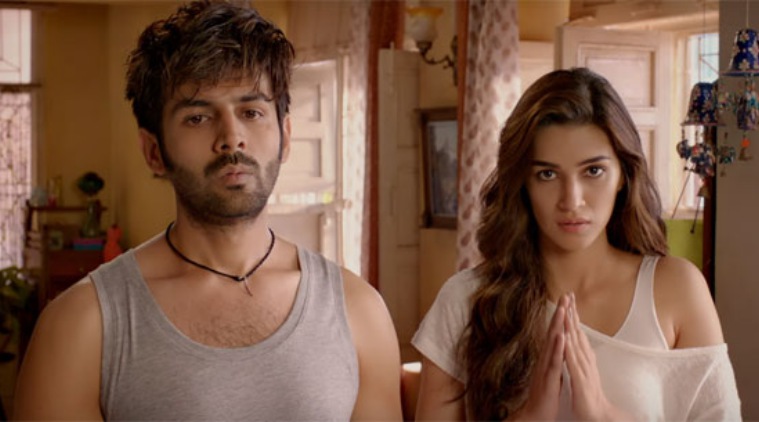 Mathura-based journalist Guddu Shukla (Kartik Aaryan), champions the cause of a regional political party.  The primary agenda of the party is to  moral-police young couples swayed by ‘western’ beliefs like live-in relationships. Rashmi Trivedi (Kriti Sanon), daughter of the local politician (Vinay Pathak), joins Guddu’s channel as an intern. And like it usually happens in these movies, sparks fly. Before we know it, the ‘hero’ and the ‘heroine’ are talking about the importance of living together before getting married. Even if a little dated, the topic of ‘living in’ in present-day Uttar Pradesh makes for an interesting premise, but this one-line concept can not fuel an entire film.

The tone is intentionally exaggerated, where a henchman casually talks about plundering a shop and then setting it on fire. The film’s intention might have been to satirise the anti-romeo squads of Uttar Pradesh, but the film is too focused on being ‘entertaining’ to actually make any pertinent point. While Stree employed a light touch while dealing with the complex issue of gender politics, Luka Chuppi‘s chooses to pontificate, and offers simplistic solutions to issues like caste, honour killings, Islamophobia and jingoism. 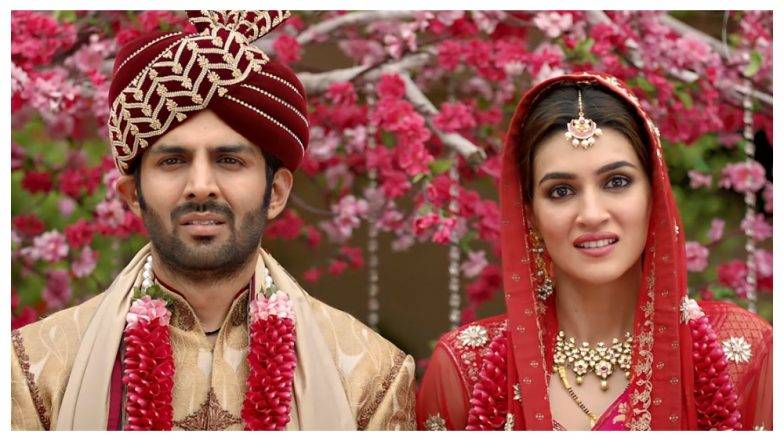 Eventually,  it becomes the very monster it is trying to satirise. The film deliberately names a muslim Bollywood actor, Nadim Khan, who bats for anti-Bharat concepts like live-in couples. Because Kumars and Kapoors are obviously flag-bearers of Hindu sabhyata. Director Laxman Utekar does a huge disservice to his film’s subjects, by skirting around issues instead of mining topical humour out of them. Luka Chuppi‘s humour is mostly slapstick. Like that of Priyadarshan’s films from the early 2000s. Using age-old tropes like mistaken identity and confusion. In short, safe and uncontroversial humour.

Not to say, that the film is flat-out terrible. Like in Stree template, the director gets a terrific supporting cast. Pankaj Tripathi has a rollicking time in his role of a sleazy womaniser. His sleazeball look is rounded off with colourful clothing and tacky highlights in his hair. He doesn’t put a foot wrong in his role as the troublemonger, constantly pitting one family member against the other. Aparshakti Khurrana’s straight-faced humour is solid, but hardly revelatory. There’s a superb gag of a middle-aged unmarried brother and his many reactions to the news of his younger brother getting married before him. All this awareness is also punctured each time the film resorts to trite references about how a woman needs to ‘tie her husband to her blouse’, or how it’s normal for newly-married men to seek ‘excitement elsewhere’.

Both Kartik Aaryan and Kriti Sanon are passable actors, who seem to glide through the intentionally hammy portions. Aaryan’s rant-y delivery, which made him famous in the Punchnama films, is reminiscent of Akshay Kumar’s bachche-ki-jaan-lega-kya days from the late 1990s and early 2000s. Sanon lacks complexity, especially during the film’s tender moments.

Luka Chuppi could have been a significantly better film, only if the film chose to come out clean about its intentions. It was writer-duo Raj & DK’s  clear-cut intention to make a feminist horror comedy that set Stree apart. Sadly writer Rohan Shankar and director Laxman Utekar aren’t brave enough to make the film that lived up to the one-line idea.