The season 5 of celebrity chat show Koffee With Karan is undoubtedly the best among all the seasons so far. From its very first episode to the latest one, the show has witnessed some really unconventional pairs on the couch together. The list includes Alia Bhatt-Shah Rukh Khan, Varun Dhawan-Arjun Kapoor, Ranveer Singh-Ranbir Kapoor, Kareena Kapoor Khan-Sonam Kapoor, etc and the latest one to join the brigade is Priyanka Chopra-Kapil Sharma.

According to reports Desi girl Priyanka Chopra who is busy shooting for her Hollywood projects, will fly down to India to shoot an episode of the show and also because of her other work commitments. And the other guest who will be seen on the show is none other than comedy king Kapil Sharma, who himself confirmed the news on Twitter. He wrote: 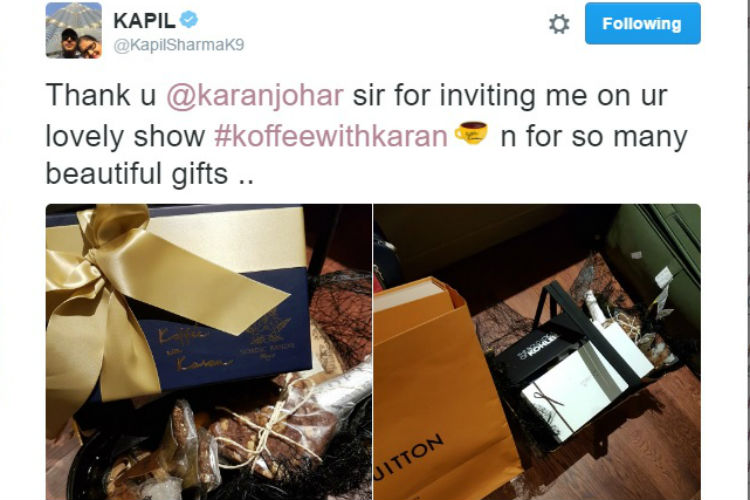 Since Karan has decided to surprise us with his unusual pairing of guests, does that mean we will get to see Priyanka and Kapil share the couch and play rapid fire for the hamper? Or is there something else on the director’s mind? Well, if there is any truth to it, then this episode is surely going to shoot up the TRPs, as Kapil and Priyanka will slay it with their witty and awesome sense of humour.

It will be for the first time that Kapil, who makes fun of celebrities on his show, will be grilled by Johar on Koffee With Karan. While on the other hand, PeeCee’s fans are eagerly waiting to see her back on the Indian screens.

With so many unexpected pairs joining the show, it would be interesting to see some of the estranged friends, couples and frenimes of B-Town on the couch together. Like Bipasha Basu-John Abraham, Katrina Kaif-Deepika Padukone, Salman Khan-Vivek Oberoi, etc.

And if Karan Johar manages to bring even one of these pairs on the show, the rest will be history!