Ever since the poster of Shah Rukh Khan-starrer The Ring  is unveiled, everybody has been talking about it. What proved to be an icing on the cake was that the poster was launched via a tweet by none other than SRK’s friend-turned-foe-turned-friend again Salman Khan. But the story is old now. Isn’t it exciting that the King of Romance will appear in a film directed by someone who has beautifully portrayed modern-day romance?

It is for the first time that Khan has joined hands with Imtiaz Ali for a film. Yes, the same Imtiaz Ali who gave us films like Socha Na Tha, Jab We Met, Rockstar, Love Aaj Kal and Highway. We should also not ignore Cocktail and his last offering Tamasha. Precisely, six films in a decade-long film career.

But why did Imtiaz choose to work with SRK? The filmmaker says that The Ring gave him a chance to break the pattern he was presenting romance as on screen. And Shah Rukh was also looking out to do the same. Talking to PTI, he mentioned:

For me, I didn’t want to fall into the pattern of a certain type of film. And he (Shah Rukh) wanted to break out of the pattern that he was in. That’s the reason why we got to work.

Also read: Raj Thackeray is running a parallel Censor Board. SRK’s meeting with him has proven this beyond doubt

Adding to how he is only interested in making a good film, Imtiaz said: 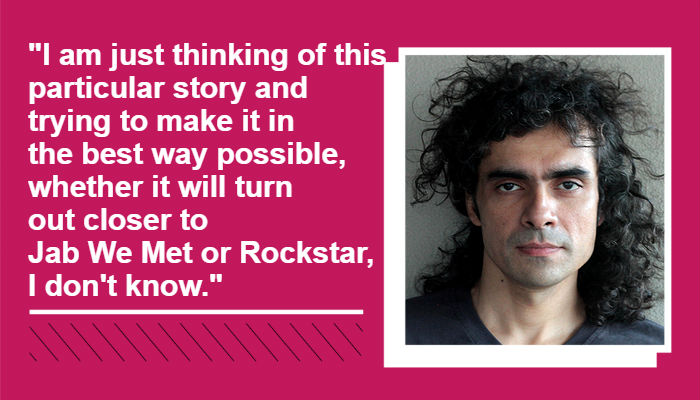 SRK plays a tourist guide opposite Anushka Sharma in the film which is scheduled to hit the theatres on 11 August next year.

The ongoing year has brought cheers to Shah Rukh Khan fans as the actor has earned accolades for the roles he played in his films. Breaking out of his mold of a ‘lover boy’ image, the 51-year-old actor won hearts with Fan and Dear Zindagi. His upcoming film Raees will see him play a bootlegger, the trailer of which has already created a lot of buzz.

Critics have often accused him of playing the same old guy-next-door to female leads almost half his age. Remember Jab Tak Hai Jaan, Chennai Express? Even 2015 release Dilwale failed to click with the audience despite raking in moolah. Now, with Imtiaz at the helm of affairs, it is expected that the August 2017 release will not leave cinemagoers disappointed.