The fact that Karan Johar and Kajol no longer share a good equation with each other is no secret. Apparently, Karan Johar was miffed with Ajay Devgn over the Kamal R. Khan controversy. The feud between Karan Johar and Devgn began when KRK alleged that K.Jo had bribed him to talk negatively about Devgn’s movie Shivaay. Kajol joined by retweeting Devgn’s tweet which read “Shocked!!!”. The tweet was Devgn’s reaction to allegations against K.Jo.

Kajol’s involvement in the feud surprised K.Jo who felt that Kajol “killed every emotion [he] had for her for last twenty-five years”. Johar, in his upcoming book The Unsuitable Boy, has written one explosive statement after another on his equation with Kajol.

Ajay Devgn has now broken his silence on the issue. He had finally reached to K.Jo’s statements about Kajol. This morning Devgn tweeted: 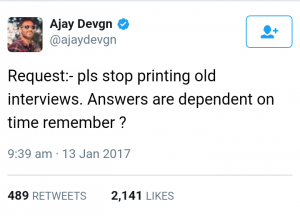 It seems as if Devgn is trying to stop people from circulating his old interviews where he talked about his strained relationship with K.Jo. Devgn, in one of his interviews, said:

We have our issues and that’s strictly personal, and nothing professional. Those are personal issues and I don’t want to talk about it.

Sources close to Ajay Devgn have now revealed that K.Jo’s “loose commenting” on Kajol is the reason behind the strained relationship between the two.

This opens up a new can of worms!  Did K.Jo pass inappropriate comments on Kajol? Did he say something which didn’t go down well with Ajay Devgn? Only time will tell.

Watch out for more updates.