Not long ago, Bollywood Queen Kangana Ranaut and the ace director Karan Johar were at loggerheads at the popular chat show Koffee with Karan. The actress went on record to say that Karan is the “flag-bearer of nepotism in Bollywood”. This statement received a shocking reaction from the host as well as her Rangoon co-star Saif Ali Khan.

This was one of the comments that Kangana made on Karan Johar. She called Karan, snooty and also stated that if ever she gets a biopic, Karan will play the role of an antagonist of that film. 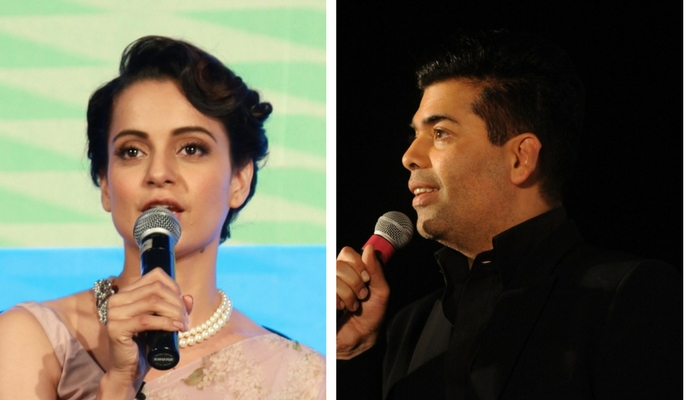 At the recently concluded LSE SU India Forum, the ace director was asked about to give his opinion on the whole controversy that has started post-Kangana’s statement. The Dharma Production owner was quick to respond on the issue.

Firstly, he clarified how he let Kangana speak her mind on the show. He went on to record and say that he did not edit any portion from the show as he felt it was right to let Kangana put across his viewpoint. However, soon we could sense Karan’s tone to turn into a more serious and authoritative. The Ae Dil Hai Mushkil maker talked about how he is done seeing Kangana playing the victim as well as women card time and again!

To add on to his point, Karan stated that if Kangana has so much of the problem with the Bollywood industry, she can leave it. His answer received a lot of applause and appreciation from the audience sitting there. Check out the video to know more:

‘She deserves all the national awards, but I’m done with Kangana playing the victim card…’ @karanjohar #KaranJohar pic.twitter.com/85SyK1EZr0

Wonder, how Kangana Ranaut will react to Karan’s statement. All in all, we feel that the war of words has just begun between the two. Only time will tell, how it will end!