It is a truth universally acknowledged that Vijay Raaz is a brilliant actor. It is impossible to overlook his scene-stealing performance in Mira Nair’s Monsoon Wedding. Despite the towering presence of actors like Naseeruddin Shah, Lillete Dubey and Kulbhushan Kharbanda, Raaz comes across as a revelation. The love story between wedding decorator Parbatlal Kanhaiyalal Dubey (played by Raaz) and the domestic help Alice (played by Tilottoma Shome) is (in my opinion) the finest love story in a Hindi film between 2000-2010. And therefore, when I was underwhelmed by 2011’s Delhi Belly – I couldn’t help but feel bad for Raaz.

Vijay Raaz in a still from Delhi Belly

The film liberally employed the choicest of expletives in Hindi and English, and introduced us to a host of colourful characters we usually wouldn’t see in a Hindi movie. The makers seemed ready to go to a place, few Bollywood films would dare to. In short, the stage was set for Vijay Raaz to shine. And yet, the movie felt like a misfire for me on many levels. My main problem with the movie was that the swearing felt forced in too many parts – especially those featuring Raaz who liberally threw around the B-word and the C-word.

ALSO READ: A not so funny joke: Saif Ali Khan reveals how Bollywood awards fool audience and why stars still attend it

What promised to be a cutting-edge Bollywood film after the release of the Ram Sampath’s fantastic song, ‘Bhaag DK Bose’, turned out to be a painfully generic crime caper. Set around some smuggled diamonds, the film was a very Bollywood take on the Guy Ritchie template of crime capers. Not to say that the movie didn’t have any  ‘moments’ – like the brilliant opening credits playing to ‘Saigal Blues’ or the odd scene featuring Kunaal Roy Kapur. But I just couldn’t shake off the feeling that the movie was trying too hard to be ‘edgy’ and ‘evolved’. 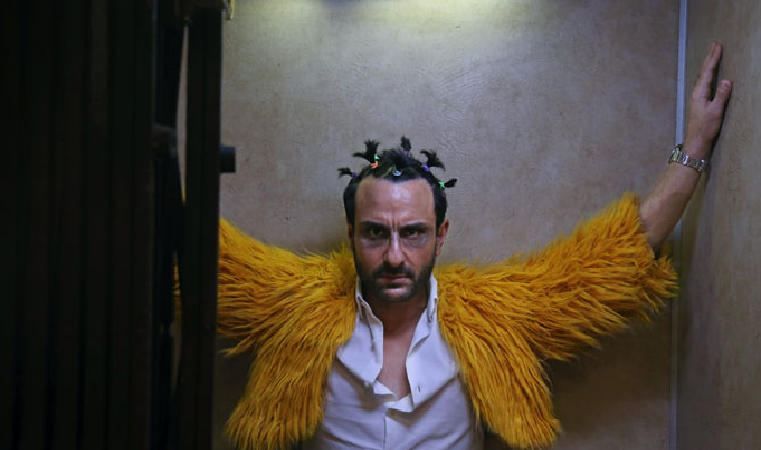 Saif Ali Khan in a still from Kaalakandi

Yesterday, as the trailer for Akshat Verma’s Kaalakandi dropped – I couldn’t help but be reminded of his writing debut Delhi Belly. The trailer shows a ‘troubled, middle-aged’ Saif Ali Khan mouthing the exact words – “I’m gonna jack off till my dick falls off”. I am no thin-skinned uber-sanskari dude, whose Hindu sensibilities have been hurt by that line. I don’t have evening drinks with Pahlaj Nihalani, figuring out how to (sub)standardise films for the middle-class Hindu family. I don’t mind filthy language, provided there is context to it.

The Wolf of Wall Street is one of my favourite films from 2013, and trust me when I say that I didn’t ‘let it pass’ because it is a Hollywood film. The point is that there is sufficient reason for the profanity exchanged between these coke-head stock brokers. In fact, the f-bombs are recurring in most Martin Scorsese films, which are some of the most acclaimed movies of all time. However, the swearing is true to the film’s Boston-setting in many cases. Which is why it can be excused in many portions of the two-part Wasseypur films. However, even there some of the swearing seemed like bad improv/indulgence.

Leonardo DiCaprio in a still from The Wolf of Wall Street.

I repeat, I’m all for liberal use of language as the writer/director sees fit within the context of a story. But I think we can do better than dropping f-bombs, to tickle the ‘cool’ crowd into laughing. Explicit language and sex scenes don’t necessarily make a film ‘edgy’ and ‘new-age’, we shouldn’t forget that language remains an important characteristic of a good film. Some of the most memorable moments in cinema, include those which are subtle and leave it to the audience’s imagination.

I think we need to make a distinction between the films that ‘appear cool and forward’ and those which genuinely are tearing the envelope. On that note, gotta go…Prasoon Joshi is calling.