Pop sensation Justin Bieber will land in India on Tuesday, just a day before his concert in Mumbai. While his fans in India are eagerly waiting to see him perform live on stage, the singer is also super excited about performing in India, and can’t wait to bring his Purpose World Tour to the country on Wednesday.

The Grammy award winning singer will perform at the DY Patil Stadium in Mumbai and the show is expected to have more than 45,000 fans turning up for Justin’s live performance. The security has been beefed up and Salman Khan’s most trusted bodyguard Shera has been specially appointed to take care of Justin’s security.

While all his fans are going crazy for the concert, its final schedule will surely be a big turn off for all the Beliebers. According to the schedule, Bieber will only perform for an hour at almost 5 hours long concert. Yes, that is right. This news will surely make all Justin Bieber fans sad. Have a look: 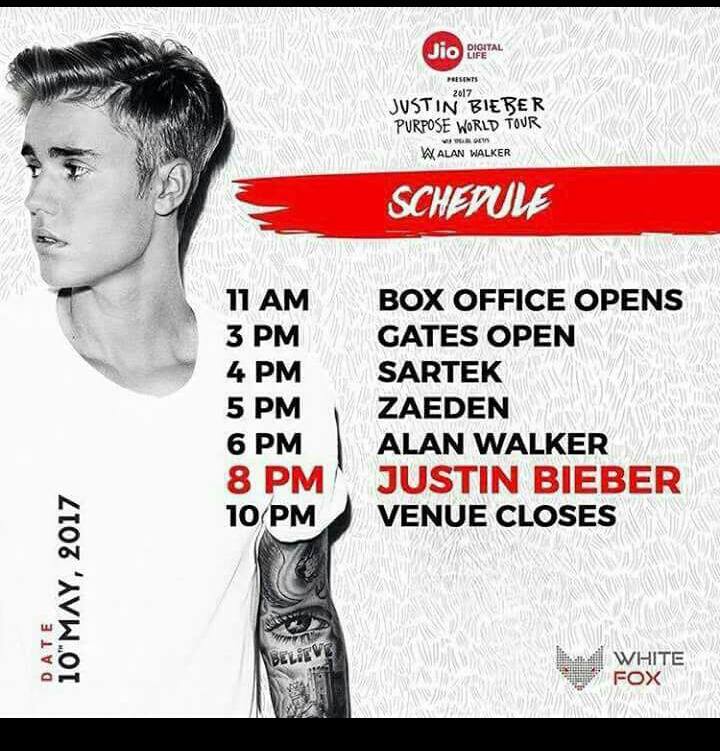 Not only this, Navi Mumbai Police Commissioner Hemant Nagrale said around 500 police personnel and 25 officers would be deployed for security and emergency disaster management at the venue. Inside the stadium, plainclothes police would be on watch, a special police control room would be functional and a CCTV surveillance system with a command center would monitor the event.

The tour is to promote his fourth album, the critically-acclaimed Purpose, in which he has experimented with more adventurous electronic sounds. Besides India, the Asian component of his current tour includes Tel Aviv and Dubai.

Also read: Will Justin Bieber be the first guest on ‘Koffee With Karan’ season 6?

Prior to the main concert, the entire stadium would be checked by the Bomb Detection and Disposal Squad. Throughout the event, drones mounted with cameras shall provide live feeds to the police control room at the venue. Also, police will provide security including surveillance by drones.