The Kapoor family is all excited and eager to celebrate Bollywood most famous veteran actor Jeetendra’s birthday on 7 April 2017. This is going to be the first time that his few months old grandson Laksshya will be the centre of attention in the whole family affair. It was earlier being said that Jeetendra’s son Tusshar, who is currently busy shooting for Golmaal Again has left with his baby boy for the shoot. Both father and son duo were said to miss the veteran’s actress birthday bash.

However, the veteran actor and his wife Shobha has spoken about the whole event. They shared how they are excited about the birthday plans and amidst all the details they spoke about how excited they are to see Lakkshya join Jeetendra on his birthday thereby putting all the rumours to rest.  The celebrations are set to take place in Jaipur whereas Tusshar is gearing up to shoot in Hyderabad for Rohit Shetty’s comedy flick.

It seems Tusshar might celebrate his dad’s birthday a day prior to the actual date. However, Lakkshya is said to be very much part of the grand celebration. The veteran actor stated that his high is his grandson Laksshya and he is excited that the little munchkin is joining him for the party. As per Jeetendra, that is his birthday gift that his nine months old grandson is being a part of the celebrations. 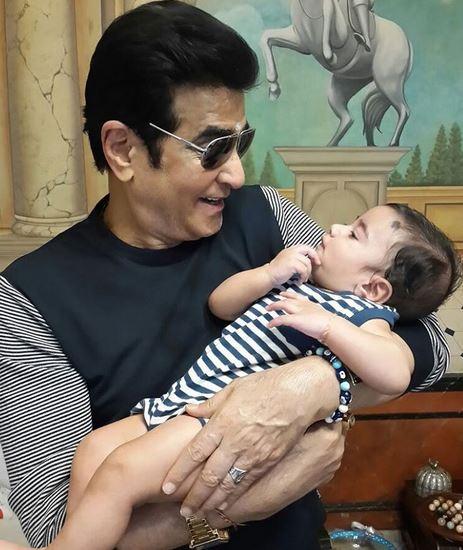 Grandmother Shobha also shared how the event is going to be grand with nearly 200 guests invited for the party. Apart from that, Jeetendra’s childhood friends are flying in from the US and Denmark to be a part of the celebrations. Talking about the preparations, the actor praised his wife.

The Rohit Shetty and the team are back with two new additions to their fun family. This time Parineeti Chopra and Tabu will play a pivotal role in the film. In the meantime, do check out these fun videos and pictures of Tusshar Kapoor and his son Laksshya.

#throwback to that moment when he took his first turn! #myboyisgrowingup #laksshyakapoor #peekaboo