Let’s play a drinking game. Each time a Hindi film blackmails a woman into keeping her unplanned baby using a doctor who points at the limbs of the foetus, we take a shot. Speaking of drinking games, say hello to Jaswinder Singh (Saif Ali Khan). He goes by Jazz. A 40-something Punjabi man with a ‘steel liver’, Jazz is at a stage in his life when he’s often reminded about umr ka lihaaz. Khan is not necessarily breaking new ground here, he’s played these roles. Jazz is another #Forever25, self-centered, commitment-phobic man-child, trying to hold on to his ‘partayyy’ days with all his might. He’s only punctual about hitting the bar. While Khan’s earlier films seemed close to legitimising such behaviour by redeeming him in the film’s final act, Jawaani Jaaneman looks at his midlife void with curiosity. 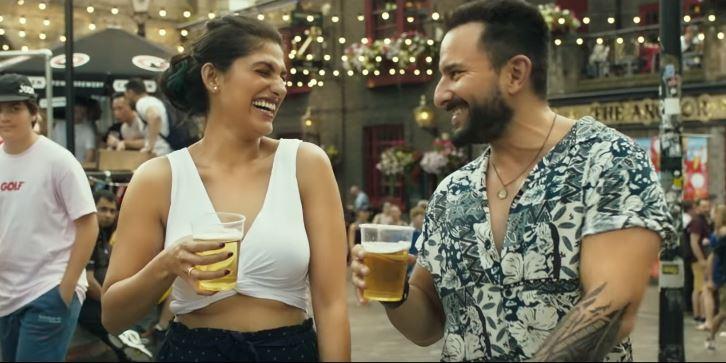 There’s a degree of shamelessness with which Jazz hits on nearly every (young) woman he can spot. He flirts with abandon, and then women ask him which dye he uses for his ‘natural’ black hair… deflating all the swag. When he’s not running a riot at his favourite gin-joint, Jazz is gyrating to Husn Hai Suhana wearing a striped bath-robe in the living room. Chunky Pandey in a Will Ferrell-ish role, plays both Jazz’s party animal BFF and his mentor for the ‘fly solo’ lifestyle. It’s all shots-and-sizzle until Jazz gets hit by a train. Not literally. He runs into a 20-something Tia (Alaya F), who says she might be his daughter.

We’ve seen that horror on Khan’s face earlier. When he imagines getting slapped by Suchitra Pillai’s character in Dil Chahta Hai, or when his character gets asked to take a blood test in Salaam Namaste. He sits down on a couch with his mouth half-open, trying to process the news. After minimum frills, a paternity test proves that not only is Jazz the biological father of Tia, but Tia herself is pregnant too. “Ek hi jhatke mein Nana bana diya…“, Jazz is heard grumbling. Desperate for space, Jazz tries to shirk responsibility, but life comes with its own lessons.

Alaya’s Tia is endearing as the 20-something girl in search of some parental affection. Growing up with a ‘free-spirited’ mother (Tabu) and an absent father, Tia’s character never rises above anything more than a trigger for Jazz’s transformation. Tabu, playing the role of the Amsterdam-based hippie mother, is a riot in the two scenes where she’s present. “Are you trying to disturb my chakras?”, she asks Jazz as he nags her with his ‘negativity’. Fully aware of how the character is expected to be nothing less than a punchline, Tabu parodies her complex-actor-from-art-films persona to perfection.

One thing that Jawaani Jaaneman does rather well, is exploit Khan’s low self-esteem, something we’ve been privy to in interviews. In a scene in Raja Krishna Menon’s Chef, Khan’s character talks about coming to Goa more than a decade ago, and getting robbed. The moment is a hat-tip to Dil Chahta Hai‘s Sameer, who by Khan’s own admission, would probably grow into Roshan Kalra in about 15 years. Similarly, Vicky from Yeh Dillagi would probably grow into Jazz… save for a few London-based Punjabi quirks. Having built an entire career on his hip and urbane persona, Khan’s filmography is littered with companion pieces.

In Jawaani Jaaneman, Khan’s own ‘vibe’ and his character mesh with a near invisible effort. Khan adds nice touches to Jazz with the way he looks for his glasses to see a photograph, or the palpitation following a round of naagin dance inside a night club.

Jawaani Jaaneman also has some earnest bit-roles by Kumud Mishra, Farida Jalal, Kubbra Sait and Kamlesh Gill. Unfortunately, the track about Jazz’s profession as a real-estate broker is the least convincing one. Khan’s potential as an actor is much beyond a selfish man-child. We’ve seen Saif ‘grow up’ too many times during these films, and if this were the last time we saw him race to a train station/bus station/airport to tell someone that he had finally transformed into a responsible adult… this would be a good way to go.