Shah Rukh Khan plays a Punjabi tourist guide, Harry, in Imtiaz Ali’s Jab Harry Met Sejal slated to release on August 4. A week later, Akshay Kumar too will follow suit with his release Toilet: Ek Prem Katha, which is set against the backdrop of Prime Minister Narendra Modi’s Swacch Bharat Mission. Both stars have been extensively promoting their films on social media. But which of the two has secured more eyeballs on Facebook?

According to figures from Facebook data analysis website Social Bakers, the Jolly LLB 2 actor was more popular than Khan between June 28 and August 2. The former currently has around 15.60 million Indian fans as compared to the Raees actor’s tally of 10.61 million. Interestingly, Akshay saw an increase of whopping 1.50 lakh followers during this period, which is almost twice the growth witnessed by Khan. Seems like Khiladi Kumar is surging in popularity ahead of King Khan. Overall, Akshay has 23.70 million Facebook followers whereas Shah Rukh boasts of 23.60 million fans.

Other than in India, Akshay seems to be giving Shah Rukh Khan a tough competition in terms of popularity among Pakistani followers as well. Though the Jab Harry Met Sejal actor enjoys support from 2.06 million fans in Pakistan, Akshay’s comes close second with a fan base of 1.91 million.

Also read: Shah Rukh Khan talks about averting Box Office clash with Akshay Kumar, shuts all who said he was scared of it

Akshay Kumar also won the National Award for his role of a navy officer in Rustom. His February release, Jolly LLB 2, has had a good commercial success. On the other hand, Shah Rukh was last seen in Rahul Dholakia’s Raees, which turned out to be an average grosser. 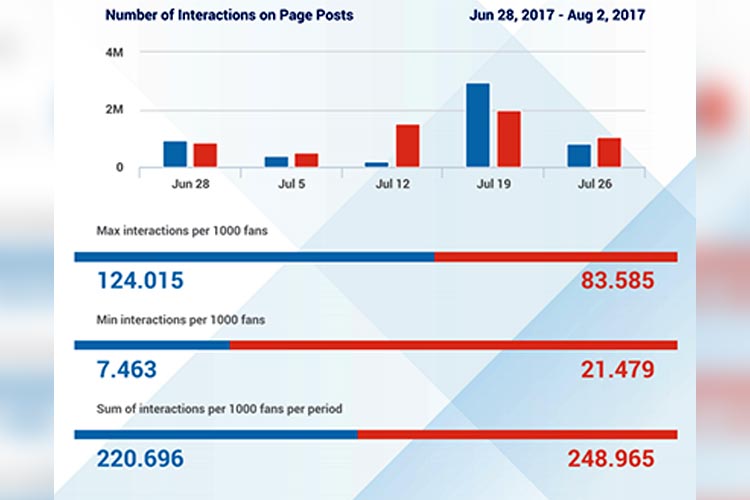 If we take a look at the growth in viewership for these two actors, Akshay here too is ahead of his fellow Delhiite. He witnessed 0.79 per cent growth as compared to Khan’s 0.61 per cent.

The coming months will witness several big releases featuring the actors and it’ll be interesting to see how the comparisons roll out. Shah Rukh Khan will share the screen space with Anushka Sharma and Katrina Kaif in Aanand L Rai’s untitled project, which is expected to release 2018. On the other hand Akshay has more immediate releases in his kitty: 2.0, Mogul, Gold and Padman.

It will be interesting to see whether August turns out to be beneficial for both the stars.