Amitabh Bachchan and Rishi Kapoor will be sharing the screen space after a long hiatus of 26 years. Titled 102 Not Out, the Umesh Shukla directorial has Big B playing a 102-year-old dad to Rishi Kapoor, who is playing the role of a 75-year-old man on the silver screen. Shukla earlier had helmed Oh My God starring Paresh Rawal and Akshay Kumar.

Rishi Kapoor and Amitabh Bachchan’s association dates to early 1970’s and they have worked together in several hits of those times. The duo shared screen space in Amar Akbar Anthony, Coolie, Naseeb, Kabhie Kabhie and Ajooba. In fact, Shashi Kapoor’s directorial Ajooba was the last film when the two actors worked together. Both Kapoor and Bachchan share a cordial bond despite the infamous episode in 2002 when Abhishek Bachchan and Karisma Kapoor’s engagement being called off. In his book Khullam Khulla – Rishi Kapoor Uncensored, Kapoor said:

“I must admit that in those days there was an unspoken undercurrent of tension between Amitabh Bachchan and me. We never sat down to sort it out and luckily the strain evaporated on its own. It was only after we did Amar Akbar Anthony that the two of us got friendly with each other.”

And the friendship lasts till date. Kapoor took to Twitter to announce his reunion with Big B on the silver screen.

Amitabh is undeniably a superb actor, immensely talented and, at the time, the number one star who ruled the box-office. He was an action hero, the angry young man. So roles were written for him. Although we may have been smaller stars, we were not lesser actors. Yet, the rest of us had to constantly measure up to him

Meanwhile, check out the first look from the film 102 Not Out. 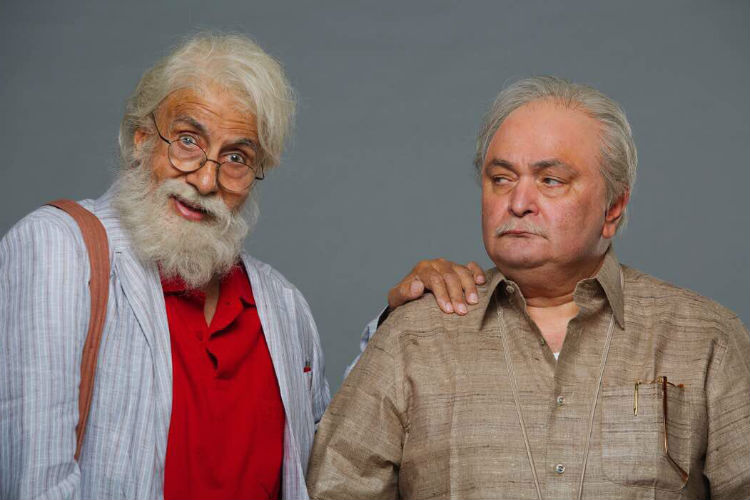 It is not the first time when these two actors are essaying the characters beyond their age. Rishi Kapoor won the Filmfare Award in Best Supporting Actor category for his role of a 90-year-old grandfather in Kapoor & Sons. The veteran actor revealed his agony of undergoing makeup sessions lasting hours. Amitabh Bachchan played a progeria stricken man in Paa

Also read: Excited for 102 Not Out? These Amitabh Bachchan-Rishi Kapoor movies will make you crave for the film even more