Hip-Hop artist Sez On The Beats, AKA Sajeel Kapoor, has shared a post on social media alleging non-payment of dues over the song Mere Gully Mein being used to promote Zoya Akhtar’s upcoming film, Gully Boy. He even said that after repeated attempts to reach the producers of Gully Boy (Farhan Akhtar & Ritesh Sidhwani’s Excel Entertainment), he had nowhere else to go but put this up on social media. The Facebook post has gotten some traction over the last 24 hours, and many are calling the filmmakers out for apparently failing the very people they are hoping to shine a light on.

Sez On The Beats was the producer on the original song featuring Divine & Naezy which became the first viral desi hip-hop track. And even though he has been credited in the recreated version for Zoya Akhtar’s film, according to Kapoor, “…even after contacting the original label several times, I haven’t been paid for my work on this track despite having a contract and my publishing split being agreed and assigned.”

The original song went viral in 2015 and has garnered about 13 million views on YouTube till date. The song has been performed by Ranveer Singh and Siddhanth Chaturvedi for the film’s music video. The recreated version has additional vocals of Ranveer Singh apart from the original vocalists, Naezy and Divine. 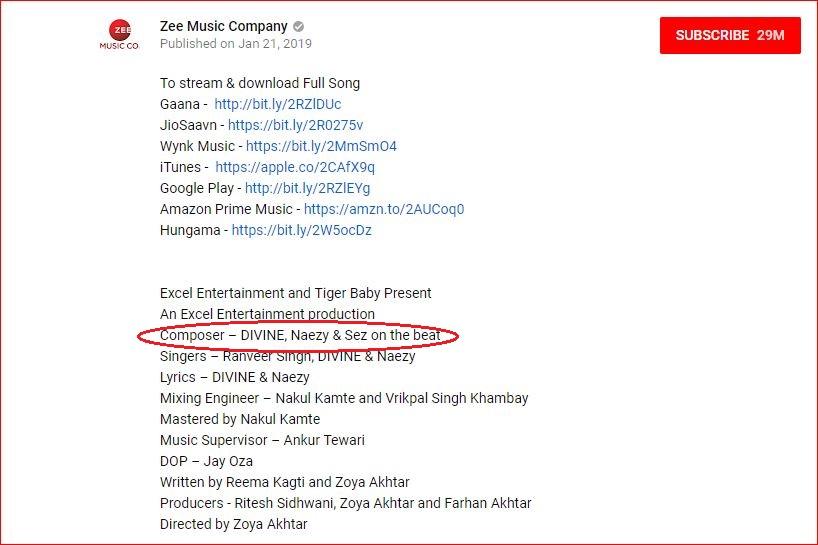 The post probably even deserves a qualification at this point, where Sez talks about contacting the ‘original’ label. Sony Music held the original rights to the song featuring all three artists. According to sources, Excel Entertainment bought the song’s official rights before going ahead with the music video for the film. Which would mean that it is Sony Music and not Excel Entertainment who owes Kapoor the royalty.

Ritesh Sidhwani & Farhan Akhtar’s production house is yet to provide an official statement on the matter.

We reached out to both Zoya Akhtar and the representatives of Sony Music for comment. At the time of publishing, neither had responded to our repeated texts and phone calls and the copy will be updated when they do.

The sad bit about a situation like this is, that something like this happens around a film that wishes to empower ‘Gully rap’ and wishes to bring ‘Asli Hip-Hop’ to the masses. The larger question here is, if the little guy keeps getting ripped off, then how does one expect music companies to nurture talent?

Update: Sez has clarified saying that Ankur Tewari (the music supervisor for Gully Boy) and Excel Entertainment have done everything within their power. It is the original label (Sony Music India) that’s not paid him his dues.